We know what the Doctor does, stop going on about it already

Well, that didn’t last long. Rather than having the whole Danny/Doctor/Clara lying fiasco lie in the background for a while to allow Clara and the Doctor to just have a couple of regular old adventures, the fragile house of cards comes down halfway through this week’s episode Flatline. 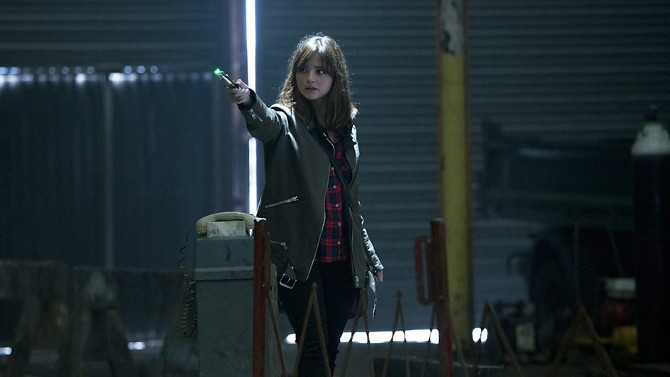 The episode starts strong with the shrinking of the Tardis, a wonderfully fun plot device if we ignore how the reasons given for the shrinking make no sense, and some creepy monsters that live in the walls. Even the fact that the Doctor being trapped inside the now teeny Tardis, leaving Clara to carry the show, works surprisingly well.

Rather than being the annoying, hopeless and helpless version of a Doctor you’d rather expect, Clara is funny, brave and resourceful and pulls off the enigmatic bit quite decently. The Doctor himself says that she acquitted herself well half-pretending to be him, but not to her face – oh no, because they’re back to rowing again. Jaw-unhinging-yawn.

He’s apparently decided that it’s bad after all that Clara hangs out with him because she’s lying to Danny – fair enough – but also because she behaved as she though the Doctor should, putting the fate of the whole planet ahead of the small gang she found herself a part of. Which is apparently bad, though we're not really sure why.

As many of our commentards have pointed out, this is a bloody stupid plot point for Doctor Who, who’s always been somewhat cavalier when it came to the lives of us puny humans. The Doctor will save you if he can, but if he can’t, he shrugs it off and gets on with things because there’s still some overall threat out there that needs facing. But when anyone on Doctor Who in a uniform makes a similar choice, they’re heartless military types – and when an assistant does it, that’s just the worst.

The assistant is supposed to be the idiot that lets the Moon hatch without knowing what’s going to happen next, for the sake of an unborn alien life rather than the lives of all the humans on planet Earth. The companion is supposed to be soft-hearted and stay that way, even though being thrown into life-and-death situations on a day-to-day basis changes people, usually towards a degree of hard-heartedness.

It’s a shame they keep throwing this supposed dichotomy of being into our faces, with Clara on one side and the Doctor on the other, even though before now, this was never a hard and fast rule for him. He usually did what seemed right at the time and has frequently risked the many for the few, but now somehow it’s a whole big thing. Because of the irritating row brewing between Clara and the Doctor the second half of the episode lacks pace, leaving it all the more obvious that bringing the two-dimensional aliens into 3D space was a totally unnecessary move that makes no sense – again.

After just a few weeks of experimentation, the aliens figure out how to make themselves 3D, ridiculous, and even worse, suddenly have the power – literally at their fingertips! – to turn other things 3D; brain-mushingly idiotic.

The spell cast by the great opening and inventive villains is broken by the stupid emotional bit and now all you can see is the flaws in the plot. A much more enticing subplot is the hint that Clara is somehow helping out the Promised Land crew. Can we have more Clara-might-be-a-villain and a little less Clara-and-the-Doctor-have-a-complex-emotional-relationship, please?

Who will stand up for European democracy? Us! says US software giant Microsoft

Nefarious activity of cyber villains continues, but don't fret: AccountGuard will save you

DC Comics to kill off Batman?

Magic potion finally runs out for famed artist and author

That code that could never run? Well, guess what. Now Windows thinks it's Batman

On Call You left your landline number in an error message, you doughnut

All the secrets of the Marvel Universe, now in JSON format