James Frey is most familiar as the author of A Million Little Pieces, a tale of addiction and rehabilitation which proved controversial when it was discovered that he’d faked some aspects of his story. Nils Johnson-Shelton is the author of a few books in the teen fantasy genre. Endgame: The Calling is their first collaboration.

Endgame: The Calling has attracted much attention by selling the film and game rights to the book for vast sums before publication. Twentieth Century Fox and Caesar’s Palace are amongst the logos you have to fight past to get to the first page. Dig a bit deeper on-line and you'll find a series of Endgame books in the works. Endgame..., The Hunger Games, you can sense the marketing moguls at work here.

What we have is basically a teen superhero story, based on a cosmology which owes more than a little to Erich Von Daniken. Ancient Gods in spaceships have benevolently raised humanity from the shadows leaving a series of clues to a game that will decide humanity’s fate around the world’s ancient monuments.

Welcome to the world of lines, makers and the real history of humanity. The future will end and time will restart.

A dozen primeval races have raised a series of teenage champions who will compete to save the world in Endgame, at the end of which only one will be left standing. Er, so is this The Hunger Games with bigger stakes? Even the teenage audience it's aimed at will probably recognise that plot device. 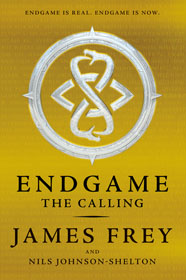 Nevertheless, Endgame: The Calling is written in a spare minimal style which makes it much more effective than the typical fantasy genre offering, with it’s unpronounceable names and parabolic sentences.

The sentences are short, yet packed with detail. A near-Earth object splinters, hitting the earth in the vicinity of our 12 superheroes. This is the starting point for Endgame and our protagonists jump into action; fighting, solving puzzles and copping off with each other.

The characters do come over as an international conspiracy of homecoming queens and valedictorians squabbling over grades – even the gipsy and street kid types have an uncluttered, cheerfully elitist approach to life.

One says: "fucking” once, another smokes a cigarette, once. If the survival of the world depends on these puritanical dullards, the future is not going to be very entertaining. Their martial arts are impressive but the humour is non-existent – Team World will fight on a whim.

These are kids who need to mellow out, take drugs and get laid. The world is coming to an end and our future is in the hands of frustrated head prefects with a few martial arts skills, kind of good-looking in an iPod advert kind of way. Cupertino Kids on steroids and the writing’s going nowhere. Too much of the: “OK that’s cool, I never thanked you for rescuing me from those two kids, they were bad news.”

Beneath all the hype, Endgame: The Calling is a very dull adventure story, though I’m sure the balletic scenes of ultra violence will translate well with CGI on the big screen. The end result of reading this is a feeling of overall disappointment. James Frey used to write good books, but now it seems it's not worth his while to do so. MD ®