We feel obliged to point out the headline statement is total, utter cobblers 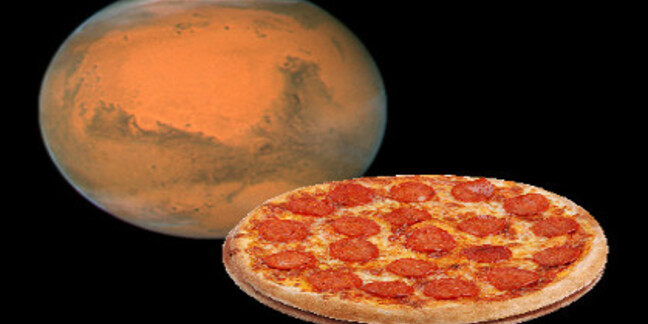 CoTW What's more important: Angry Birds or the Space Shuttle? According to one Register commentard, it's the former. No, really - and yes, it's time for Comment of the Week once again.

Silver-badged commentard Irongut opened this week's batting after weighing in on the news that Martha Lane Fox, or Baroness Lane-Fox of Soho, doesn't like the internet because it's made by men:

Does she have a similar problem using bicycles, cars, buses, trains, boats, buildings, pavements, roads, bridges, clothes, shoes and all the other things that were designed and largely built by men?

Shut up and get back into the kitchen shed, you deviant. PATRIARCHY, amirite? All you upvoters can just die in a man-made ditch.

Meanwhile, attracting near-universal ire from you happy bunch of commentards was intrigid, who reckons that space exploration is far more important than app development. Sorry, my sub-conscious edited that - he/she/it (for who knows what gender lies behind a random username on the interwebs?) seems to believe that app development is more important than space exploration:

I'll tell you one thing

While science may be more important than the next big app, there's one major thing that the next big app trumps in terms of usefulness, and that would be space exploration.

Few things drive me as bonkers as reading about scientists getting excited over discovering water droplets in an otherwise uninhabitable planet 2,000 light years away. These people are being allowed to use billions of dollars worth of scarce resources on their fruitless pipe dreams about space utopia that were brainwashed into them by Gene Roddenberry.

Meanwhile, deserving a special mention for the brief blurt of invective is some random person on Twitter, who decided to have a right go at our own Jasper "Jihadi" Hamill, who (after confessing to taking part in terrorist actions earlier this year), wrote in a sensitive and heartfelt way about the problems suffered by Sky Broadband users north of Watford.

Our kind and caring missive to those poor souls scattered in their hamlets along the M1 (and other assorted cart tracks, no doubt) prompted this outburst from a user of the popular microblogging website Twitter:

@jasperhamill @TheRegister I don't know who the hell you are (cockney wanker I assume) but before you start ... http://t.co/oWuAlMmR1A

Our very own Cockney sparrow shot back:

Meanwhile, in the news that US rockets'n'cool stuff firm Lockheed Martin claims to have cracked the secret of usable nuclear fusion reactors, commentard franklin said:

Despite the naysayers, fusion power has made considerable progress. It hasn't progressed as fast as we would like, but sometimes new technology works that way.

For example, Lawrence Livermore and MIT have both produced fusion reactions that net more energy output than energy input. They don't do it for long, but they do do it, which shows it is possible.

I for one would like to see more research put into fusion power. If and when it can be made to work, it's a civilization-wide game-changer. A lot of political, social, economic, and resource problems turn out to be power problems, when you have copious amounts of cheap power. (For instance, much of the developing world, and more recently the developed world, struggles with water shortages; cheap and plentiful power make desalination easy.)

It pains me that we as a species spend more money on spectator sports every year than we do on something that can profoundly change human civilization for the better.

And lots of you agreed with him. 77, in fact, which makes this a very near contender for Comment of the Week. Yet there's bigger and better to come.

The Wooden Twig of Fail goes this week to...

Anonymous Coward - that ever-popular handle in Reg forums -had this to say in praise of Microsoft Office's rather unpopular ribbon navigation bar:

"the Ribbon Bar was nothing more than a cheap UI gimmick to boost sales during a bleak-looking sales cycle via the introduction of novelty."

The Office toolbar / menu UI was broken, and the ribbon is more discoverable than what came before. Yes, it's different, but at least it doesn't purposefully hide things like the "you've not used this button, I'm going to hide it" features added in previous versions to try and trim the UI down to something navigable. It takes up less screen space, highlights commonly used and important functions and is more organised. It even supports the old menu shortcut keys.

Nobody is forced to use Microsoft software.The amount of abuse thrown at them because of things like deciding to make a flat icon rather than a detailed 3D one on this site is almost as hilarious as it is unbelievable.

And that was so unpopular we can do nothing more but award it the Wooden Twig of Fail. Well done, Anonymous Coward. May you brandish your twig with pride.

This week's winner of the Golden Vulture Dropping of Excellence

Those in glass houses, Sir Jony...

And similar sentiments. He must reeling in how shamelessly Nokia ripped off the colourful design of the iPhone 5C, Google for nicking the flat design of iOS 7 and the LG Prada for so cheekily travelling back in time and pilfering the original iPhone's touch screen. A pox on them!

Well said, returnmyjedi. Bask in the glory of your Golden Vulture Dropping.

Straw poll: forum badge for winners of the Golden Vulture Dropping. Yay or nay? It may never happen, but canvassing views is never a bad thing. Weigh into the comments and let us know.