Doctor Who and the Dalek: 10-year-old tests BBC programming game

Doctor Who has been pressganged into the BBC’s “Make it Digital” push to help kids understand computers rather than just playing with them. Its answer: an educational video game.

The cunning plan is to sweeten the task of understanding basic coding by sneaking it into something that is fun, in order to reach the kids who don’t long for a copy of Visual C++ as their ideal Christmas present.

Based upon the Unity engine, it works on the vast majority of platforms, with Peter Capaldi’s voice and what would appear to be a good Dalek who is given eight missions that involve the standard “run round, collect things, shoot and jump” gameplay.

This is competently done and my 10-year-old, whom I used as a lab rat, gave it his approval as he zapped the Cybermen and Sontarans.

Given they’ve spent the last 50 years invariably losing to some old bloke occasionally assisted by a sidekick, the Daleks are in sore need of a service pack and after completing each level, there is a puzzle to be solved where you program a Dalek to navigate, shoot and respond to input, gradually building up the ideas of sequential evaluation, loops, variables, if/then conditionals and elementary event-driven programming.

That’s pretty ambitious for 8-11-year-olds, but is the basis of what they are expected to know nowadays and many primary teachers, who rarely have any understanding of programming themselves, are already struggling. 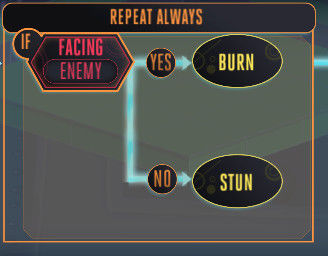 The puzzles are spiced up by including the ability to program your tame Dalek to change colour and loudly emit the standard set of empty threats they feel make them sound hard.

This includes the ability to burn holes on the ground under them, which is a cunning way of introducing binary and bitmaps because you can make the Dalek form letters and shapes on a grid by writing movement code. The more feral kids will use this to write rude words, which can be a powerful motivator to learn things at that age.

When you solve each of the eight coding puzzles, this makes the Dalek more powerful with force fields, weapons and flight, which apparently is seen by the BBC as a good thing. Do they watch their own programmes ?

The target age range is KS2 which is from 8-11, so I dragged young Alexander, my son, into the BBC and let him have a go on the pre-release version. He had no problem driving it, saying “It was surprisingly good, despite my dad’s warnings about the BBC – though it did crash twice.”

“Since it was aimed at people below the Scratch mark I thought they would do more programming,” continued Alexander, “though you could skip all the blowing up stuff to just the programming and it had basic variables in it. It would be better at the end if you could copy the programs you made so that you learnt that you could use it like a proper programming language.” 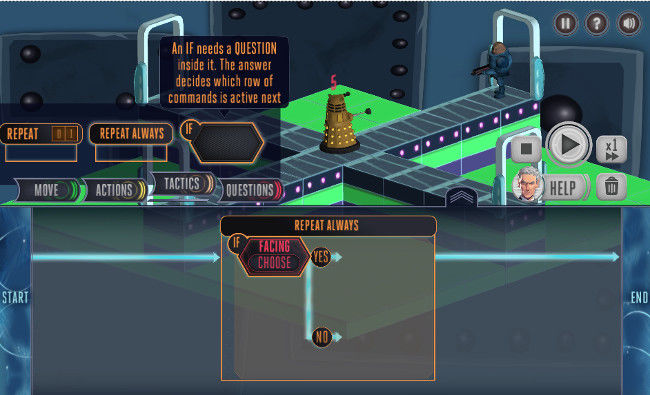 Logic: Get your kids into programming by tinkering with Daleks' heads

He’s a VB programmer (be gentle, he’s only 10), which is part of the problem schools face in teaching coding; they are supposed to teaching coding before the idea of a variable has appeared in maths. To get past this, the Doctor Who creative team have used a similar look and feel to Scratch, already in widespread use in schools to introduce coding.

Although as an IT pro you take pride in mastering cryptic error messages, like “NULL pointer is not NULL at line -1” (yes, I’ve had that one), it can put off the average eight-year-old. The “Make it Digital” agenda is that every child should code, not just the smart ones, so as in Scratch, it is actually impossible to have a syntax error.

Code elements are dragged and dropped into a timeline, which is then executed step by step with the Dalek following your orders. This provides the sort of feedback that appeals to kids – but you can have bugs that you need to sort out, where the Dalek gets stuck or drives off the edge of the zone to fall into an eternal abyss. Inevitably the kids fated to grow up as Register readers will contrive to make their Daleks' demises as entertaining as possible.

This means that although the puzzles have solutions, they are reasonably open in that it isn’t a dull “here is some logic, type in the truth table” (hint: a truth table is Boolean logic, not a Sontaran interrogation device)

Doctor Who and the Dalek is intended to be usable without supervision, but in a couple of weeks the BBC is releasing teacher packs to help incorporate them into lessons and it's possible to do just the coding bits without the game, which is released on Wednesday at http://www.bbc.co.uk/cbbc/games.

Overall it’s rather good. Like Alexander, I think the coding could be extended a bit.

The second version is already being nailed together in Wales. ®