It's Big, it's Blue... it's simply FABLESS! IBM's chip-free future

Or why the reversal of globalisation ain't gonna 'appen

Worstall on Wednesday IBM has coughed up $1.5bn to get Global Foundries to take its chip manufacturing arm off its hands as reported here at El Reg.

There are a number of economic implications to all of this, perhaps the most important of which is why the eco-lunatic fantasy that we could reverse globalisation is simply nonsense (of course, whether it is desirable to do so is highly debatable).

The capital requirements in certain businesses are simply so large that only a global supplier can possibly meet them: and that even IBM wasn't in fact a company large enough to support being a player in one of those industries shows quite how large "big" needs to be these days.

IBM had several basic business problems with its chip-making unit. It was losing money, which isn't quite what you might desire in a subsidiary. A normal reaction to that sort of situation is simply to close it down. Over here we tend not to do that because the redundo costs and so on associated with simply firing everybody can be huge: that's why BMW coughed £500m to rid itself of Rover – it was cheaper than simply paying everyone off.

That's not something that applies in the US environment: and anyway, there's not actually a legal requirement for a company to stand behind the debts of a subsidiary. You can, if you're brave enough, simply shrug and say, 'Well, it's bust'. 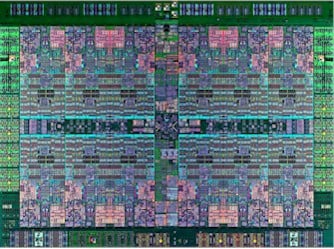 In this case, the now smaller Blue couldn't really do that: New York State would be apoplectic if it did. And there's a deal at the IBM research site there whereby the State owns the buildings and equipment and IBM employs the people. That would have died if IBM had just walked. It's nice of the local politicians to give them that free money, of course, but free doesn't always, in the long term, mean free.

Also, Big Blue will be wanting to maintain control of the design and intellectual property of the chips it uses, and reportedly plans to plough $3bn on R&D over the next five years.

There's also the slight problem that those plants are the ones that make the chips, the chips with a different architecture and design from everyone else, that Littler Blue puts into its own computers. So “bugger it, we're closing the thing” was never really an option.

And thus the need to cough up that $1.5bn to the people taking it off Big Blue's hands, plus the 10 years supply contract of those chips and so on. All of which is interesting as a series of business problems but their root problem also tells us a great deal about what's wrong with the delusions of the anti-globalisation crowd. For IBM's economic problem was that its own internal (and, of course, including the machines they shipped to clients) demand for chips simply wasn't large enough to cover the costs of the factories needed to make them.

Next page: Economies of scale and globalisation
Page: