If you believe their claims. Promising if true, mind

Cloudy firm Panzura's cloud storage gateway is saving distributed projects businesses enormous amounts of time when opening shared project files, it claims. So much so that Panzura is now focusing on the Architectural, Engineering, and Construction (AEC) market niche.

There’s more information about Panzura’s cloud storage gateway here, in which we wrote: “A Cloud Storage Controller has tiered storage system DRAM, SSDs, RAIDed disk drives, and a cache. Files can be pinned so that they are held locally for fast access. The company says it provides cloud capacity with LAN-speed access. Controllers at new locations become new directories in the filesystem and offer immediate access to existing users.”

Back to AEC. The Panzura-supplied numbers are certainly impressive and the firm starts with a CAD example, involving the opening, closing and saving of project files. It’s for a 1.5MB AutoCAD Civil3D file, with a user in California needing to access it from a New York data centre. There’s a 10Mbit/s link between the two. The network round trip time is 86ms but the total file access time is 22 minutes (according to Panzura's maths), which is made up from:

It’s 20 minutes once WAN optimisation is used and warmed up, although with a cold WAN-optimised link it actually takes 24 minutes.

These numbers suggest basic file access latency is not the problem, because a 10Mbit/s link could move a 1.5MB file in under two seconds. It’s the file opening/closing component operations that are the issue. Bandwidth is not the problem.

Panzura’s gateway was deployed in the 86ms round trip situation with a 10Mbit/s link, and – wait for it – Panzura says the same overall operation took eight seconds: 165 times faster than the initial 22 minutes. The company has several other examples of similar accelerated file access. 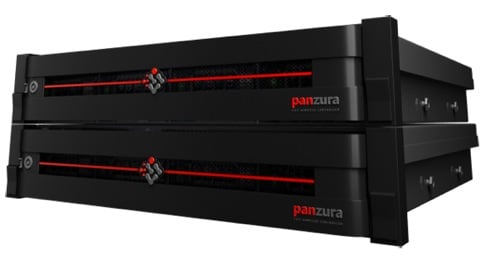 Barry Phillips, Panzura’s chief marketing officer, says the issue isn’t network latency in itself.: “It is actually an issue with the number of file operations that sequentially occur and the latency between the user and the definitive copy of the file (where the file is locked).”

Phillips says: “Panzura started to focus on the Architectural, Engineering, and Construction (AEC) space in the fall of last year. Our ability to lock files across sites has solved a massive industry issue of project teams not being able to collaborate on projects across site.”

The software has “multi-user file locking across sites to solve the same cross-office collaboration with Building Information Management (BIM) apps that enable multiple people [to access] different parts of the file at the same time.”

We can imagine how having multiple users waiting 10, 15, 20 or more minutes for shared files to open is a great waste of time.

Phillips cites another user: “We also have found the same pain point in Manufacturing with CAD apps. Milwaukee Tool had issues with opening CAD files from China and said that sometimes they did not open at all. It takes 20-30 seconds with Panzura. They also dropped the time to open large video files from 7-8 hours to near instantaneous.”

I had no idea such bizarre file opening inefficiencies were going on.

Psanzura’s revenues are split 50:50 between this CAD/manufacturing project file open time speed up and, so they tell us, “revenue from customers that are tired of exponential data growth and are using Panzura plus cloud storage for all tiers of storage at all sites. GRAEF was going to spend $250k on primary and backup storage in just two sites and is now paying only $364 a month to AWS for all tiers of storage at all sites. It is the same, exact looking, tier 1 storage at every site and common tier 2 and 3 across all offices.“

Do other cloud storage gateways have the same benefit as Panzura in the CAD/Manufacturing use case?

Wouldn’t it make sense for WAN optimisers, like Riverbed for example, to get in bed with Panzura and see what a combined technology could do? ®