Trips to Mars may be OFF: The SUN has changed in a way we've NEVER SEEN

Only nuke power can save us from radiation

+Comment A drop in the solar wind of a kind never yet seen in the space age has made travel beyond Earth orbit a lot more dangerous, according to boffins – so much so that a manned mission to Mars may not be feasible for many decades.

"The behavior of the sun has recently changed and is now in a state not observed for almost 100 years," says professor Nathan Schwadron. "Starting in about 2006, we observed the longest solar minimum and weakest solar activity observed in the space age." 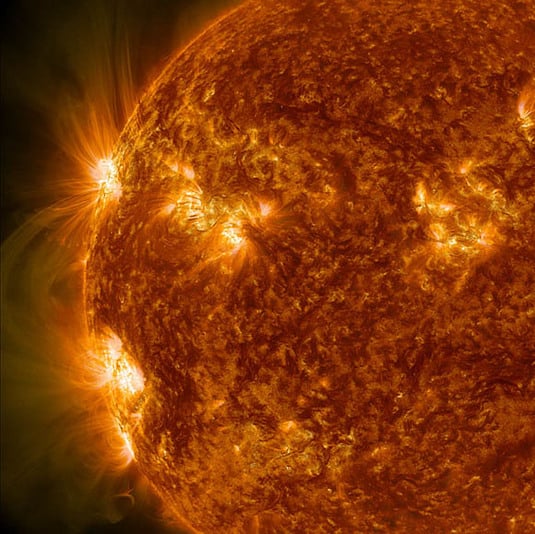 There may not be much of this going on this century

It's a story we've already reported on here at the Reg: some solar physicists, noting that the current "solar maximum" is an especially damp squib, suspect that the Sun may be entering a so-called "Maunder Minimum", a lengthy spell of low to no activity. Such a minimum occurred from 1645-1715.

The down side of this from a deep-space astronaut's point of view is that the solar wind normally has the effect of reducing the amount of dangerous cosmic radiation that can reach the inner solar system. While particles and radiation from the Sun are dangerous to astronauts, cosmic rays are even worse, so the effect of a solar calm is to make space even more radioactive than it already is.

Deep-space astronauts, of course, are even rarer than normal astronauts. A normal astronaut travels only to low Earth orbit - as on a mission to the International Space Station, for instance - where he or she remains well protected by the Earth magnetic fields. The only astronauts who have ever been further from Earth than this were the Apollo moon explorers of the 1960s and 70s, and they went only on brief missions, carefully timed to reduce radiation risks.

Schwadron and his colleagues have been assessing data from an instrument called the Cosmic Ray Telescope for the Effects of Radiation (CRaTER) aboard NASA's Lunar Reconnaissance Orbiter currently circling the moon. The LRO was originally intended to scout ahead of a new US manned moon programme, and as such one of its purposes was to assess the effects of radiation on astronauts.

Lacking a President Kennedy to get them funded, the planned manned moon missions were cancelled - and judging by what Schwadron and his crew have found in the CRaTER data that might be just as well. They write:

For the sake of planning, a 3 per cent risk of an astronaut dying due to radiation exposure during a mission is seen as the acceptable limit: it's a dangerous job, after all (one should note that the death would probably be after the mission from cancer, perhaps many years later, rather than from severe radiation sickness while still in space). From Schwadron and his crew's analysis, if a lengthy solar quiet spell is indeed on the cards, the maximum time an astronaut can reasonably spend in space will be well under a year.

That's potentially bad news for a Mars trip, as under current planning assumptions both outward and return flights would take six months - and further exposure would be suffered during time spent on Mars, though less than the same period spent in space.

"While these conditions are not necessarily a showstopper for long-duration missions to the moon, an asteroid, or even Mars, galactic cosmic ray radiation in particular remains a significant and worsening factor that limits mission durations," says Schwadron, gloomily.

The scholarly paper setting out the team's research can be found here, published by the journal Space Weather.