Trips to Mars may be OFF: The SUN has changed in a way we've NEVER SEEN

Only nuke power can save us from radiation

It would seem that travel by living humans to and from the red planet may never be very practical using the current methods: feeble chemical rockets can propel only very lightweight spacecraft that offer little or no protection against radiation, and mean that they must coast unpowered most of the way, taking a long time. 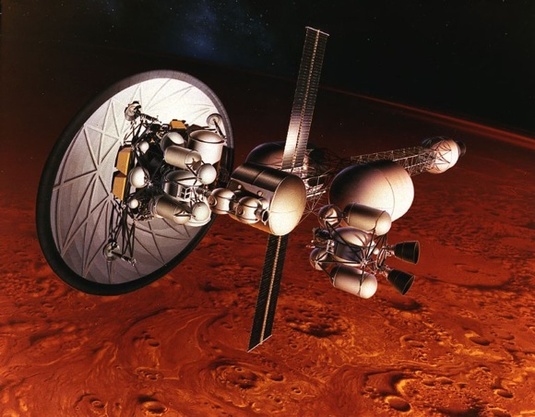 How they thought we'd be doing it, 54 years ago

If human beings ever aspire to travel much beyond Earth orbit, we're going to need something better: something most likely nuclear powered, certainly for manned spaceflight purposes. That would cut journey times and allow for more shielding. The great science-fiction writers of the past almost unanimously assumed that nuclear space propulsion and/or power generation would have to appear for any serious space travel to take place.

Former NASA astronaut Dr Franklin Chang Díaz has suggested that nuclear plants of the type used in submarines could power his VaSIMR plasma rockets to take a crewed ship to Mars in a month. SpaceX, the rocket firm run by famous tech tycoon Elon Musk - well-known to be keen to get people to Mars - has expressed the opinion that NASA should work on nuclear-thermal rockets for manned flight to the red world.

Many decades into the "space age" there's no sign that NASA is seriously moving to produce anything like that, however, and the general fear, distrust and intensive regulation surrounding anything nuclear means that only a powerful national space agency has much prospect of success. ®