Less than three weeks after it debuted the Windows 10 Technical Preview, Microsoft has shipped a comprehensive update to the pre-release OS that brings substantial changes, including some new features borrowed from Windows Phone.

The new build, number 9860, replaces the 9841 build that was included in the original Technical Preview download and incorporates nearly 7,000 fixes and improvements, according to a blog post by Microsoft's Gabe Aul on Tuesday.

"As we've said, we're sharing stuff early and moving quickly to do so," Aul wrote. "In fact, the build that we're rolling out today is something that we ourselves only got a little over a week ago!"

The most prominent new feature is Action Center, the unified notification box that Microsoft has brought over from Windows Phone. This is where notifications from both the OS and apps will appear, including such things as email and calendar notices, IMs, posts from the Facebook app, and so on. Aul added that the version of Action Center in build 9860 isn't final and that Redmond plans to clean up the look and feel later. 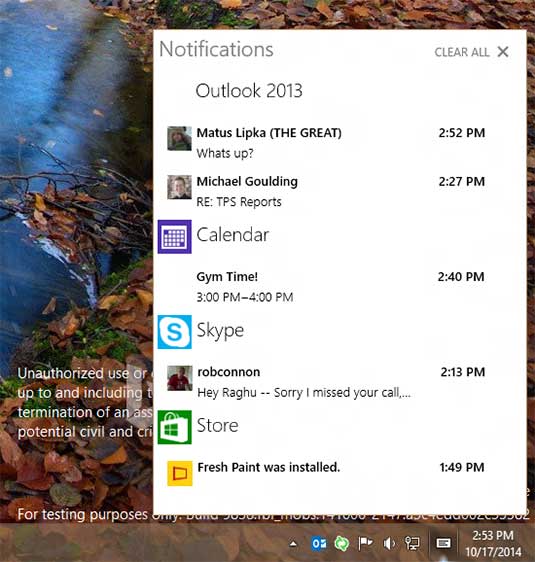 Could use some work: The UI of Windows 10's new Action Center will probably change

Other UI changes in this release are minor. There's a new hotkey that allows you to move apps easily between monitors by pressing Win+Shift and the left or right arrow key. There's also a new animation when you change virtual desktops, to make it easier to realize when it's happening.

Aul said that in some cases, the UI in this build has actually regressed because Microsoft hasn't figured out what the final look and feel should be. For example, some graphics may look garbled, depending on your display driver.

But for those who would like to see more obvious Windows 10 changes more quickly, Microsoft has added an option to put a Technical Preview system on the fast track to receive the latest changes. Switch to the "fast" release "ring," and you'll see each new build the day it's published – provided, that is, you're "adventurous."

"If you want to wait a bit and let others find any gotchas so that the community gets caught up with known issues and workarounds, then you'll want to stay in the 'slow' ring," Aul said.

Aul did not say when testers can expect to see the next build of the Windows 10 Technical Preview, except that sometimes new releases will come frequently while other times there will be longer gaps.

Microsoft is releasing updates to the Technical Preview via Windows Update, so many users should be able to wait for build 9860 to install automatically, typically overnight. Impatient users can force the update via PC Settings, but be warned: the new build will be anywhere from 2GB to 2.74GB, depending on CPU architecture and language, making it just as big as or bigger than the original Preview download. ®