A top Google exec has broken the record for the highest free fall to Earth – in a largely self-funded stunt to explore the stratosphere. 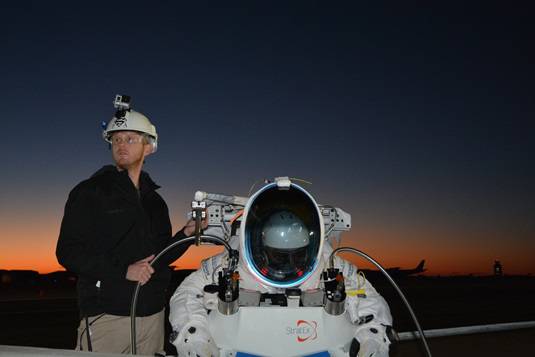 On Friday morning, Pacific time, Google's senior veep of Knowledge Alan Eustace rode a helium-filled balloon to more than 135,000 feet above the deserts of Roswell, New Mexico, in a specially designed space suit before firing a small explosive charge and cutting himself loose for free fall.

Eustace, 57, reached a recorded speed of 822 miles per hour, and caused a sonic boom that could be heard on the ground. After opening his parachute, he glided to the ground some 15 minutes after starting his free fall, and touched down safely, albeit with a somersault on landing.

"It was amazing," he told The New York Times.

"It was beautiful. You could see the darkness of space and you could see the layers of atmosphere, which I had never seen before. It was a wild, wild ride. I hugged on to the equipment module and tucked my legs and I held my heading."

His free fall shattered the 127,852-feet altitude record of set in 2012 by self-styled daredevil Felix Baumgartner, although the Austrian's 843.6-miles-per-hour record for the fastest speed achieved in free fall still stands.

Baumgartner's high-profile attempt was a publicity jamboree for the skydiver and his fizzy-drink sponsors. The Austrian rode up into the heavens in a capsule rigged out with cameras, and completed several test runs before the final jump.

Eustace didn't bother with the capsule: he simply strapped himself under the balloon with a GoPro camera attached to his suit, and only had a small team of advisers to help him make the jump. Google offered to fund the attempt, but Eustace paid for it himself so that it could be done without publicity until after the event.

His aims were also rather different from Baumgartner's. Rather than making the attempt to sell an energy drink that has a faint odor of vomit, Eustace's jump was a test bed for future human exploration of the upper atmosphere.

"I always wondered: what if you could design a system that would allow humans to explore the stratosphere as easily and safely as they do the ocean?" he said. "I hope we've encouraged others to explore this part of the world about which we still know so little." ®