Meet Mr Gamification: He's got a NUDGE or two for you

What a lot of "Nudge" looked like to me – when it actually did work – amounted to no more than good design or good writing, or an increase in advertising spending. I quoted this example – where grand claims were made for a new "Behavioural Insight" or nudge (in organ donation) that had nothing to do with any new science, or psychological insight. In fact, in the experiment, the UK government simply increased the prominence of the appeal – by plastering the "register for a donor card" right in front of people renewing their driving licence. No wonder registrations increased – and it had nothing to do with behavioural insight.

Kam didn’t like this at all. We were being foolish if we ignored the insights we could glean from “the Greats of Behavioural Economics”.

I said that, to me, “The Great of Behavioural Economics” sounded like a lot like “The Greats of Scottish Goalkeeping”. There’s a lot of counter-intuitive anecdotes about irrationality, but that doesn't count as a science.

(Tim Harford made this point earlier this year in the FT. “How many special cases can behavioural economics sustain before it becomes arbitrary and unwieldy?” 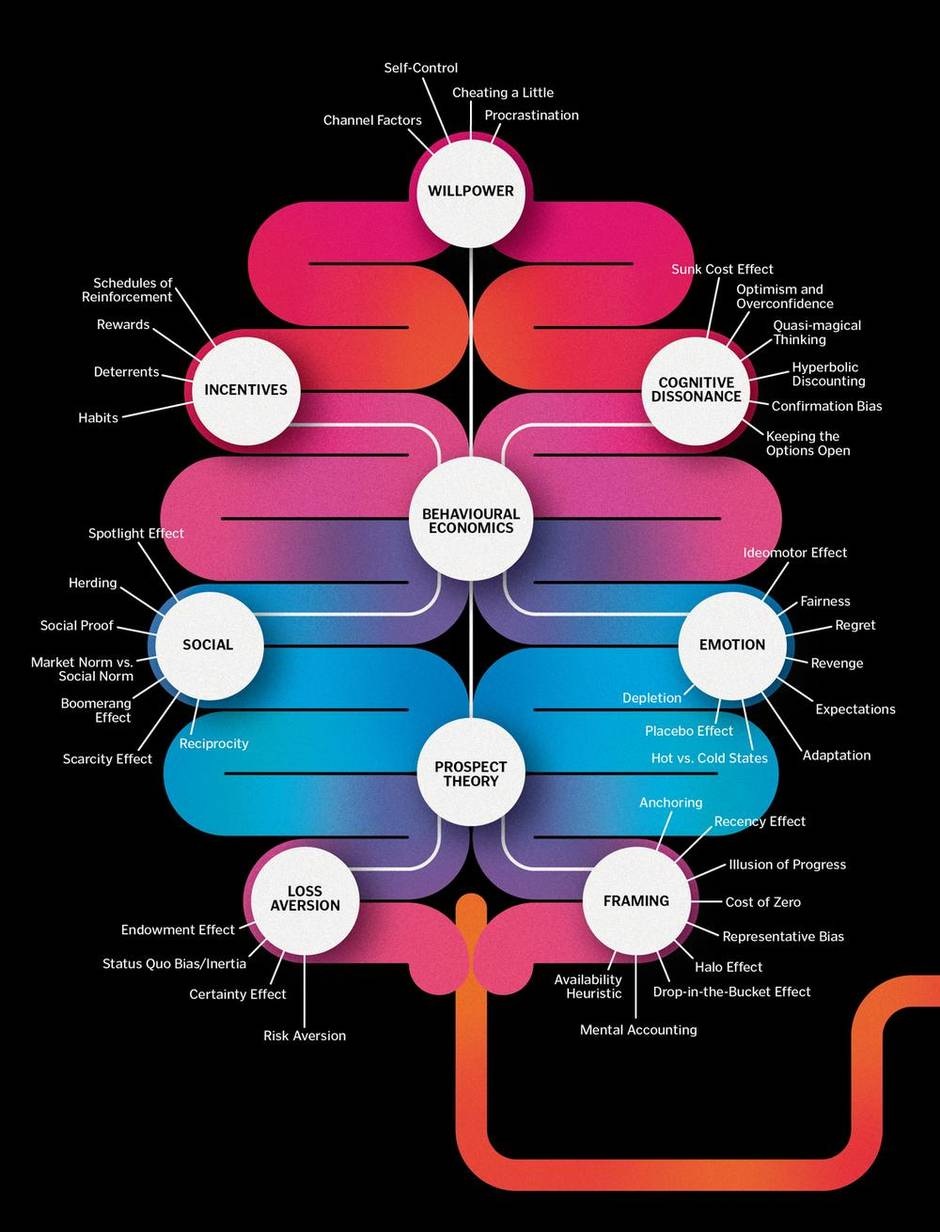 Does this look like science to you - or a mess of
special cases? – See full infographic Globe and Mail

The feared “mess of special cases” already seemed to be upon us. If the organ donation “success” was really an example of bleeding edge behavioural science, then what gets called "behavioural science" perhaps is no more than a collection of marketing tricks – with some impressive sounding “scientific babble (like “choice architecture”) sprayed on. A mess of special cases doesn't give you anything you can build on, and so it isn’t science, I said.

They blinded you with "science"

I pointed out that the marketing and advertising had always loved citing "new psychology" – ever since Freud's nephew Edward Bernays went to America and sold his Uncle's ideas. He repackaged Freud – then a "new scientific behavioural insight" – and invented modern public relations.

Spray-on science helps you win clients; this is a more modern example.

And anyway – why would you want to put psychology “on a scientific basis”? Britain doesn’t do ideology (as Orwell noted) and it doesn’t really have intellectuals – and maybe it isn’t poorer for the absence of either. But what it does have is a chatterati, a class of liberal arts graduates (the elite's badge is the Oxford PPE) that gets transfixed by pseudo-scientific explanations. The New Behaviourism to me looks like another of the silly, positivist fads that gets them excited from time to time:

“Yes, Igor – finally we’ve cracked this awkward human, and reduced them to an algorithm.”

The problem with these tricks is that they only go so far. It’s a bit of a cliché to say that "You can’t nudge your way to better NHS" – but it’s true. How can you reform massive public institutions with a bit of nudging? You can't.

Yes, Kam said, “I’m a liberal paternalist – I do believe in nudging for the Greater Good.” Then there was something about “collective intelligence”. Finally all the cards were on the table.

It would be unfair to blame "gamification" on any one person, not least Kam Star. As his funding page shows, it’s the vast, "grey" state of research councils and quangos that keeps this authoritarian and pitifully unambitious project alive.

If it weren’t for the taxpayer funding, I wonder if anyone outside academia would have heard of gamification and its ilk. The demand from the chatterati for simple, easy-to-grasp pseudo-scientific explanations is what created created the "Nudge" phenomenon, and it percolated through to the political class, right into No.10.

After a lively hour and a quarter, the panel concluded with no fisticuffs. It’s a credit to the Institute of Ideas for putting dozens of such debates together in one place over a weekend. Most “ideas festivals” are bunches of media luvvies politely agreeing with each other and plugging their books. And you know what TED Talks are about – they don’t even allow any questions. ®

*Bootnote And that "£3.3m of free money"? Have a guess where that comes from. I'll tell you in the Comments.