Is this Doctor Who episode an enjoyable romp or a namby-pamby feelings fest?

TV Review El Reg's resident Doctor Who fans – Brid-Aine Parnell, Gavin Clarke and Jennifer Baker – have come together to discuss the plot of tonight's episode, In the Forest of the Night.

After the tentative forward momentum achieved in Mummy on the Orient Express and Flatline, Doctor Who has fallen to the bottom of the barrel again with namby-pamby, rose-tinted feelings fest In the Forest of the Night.

An entire class of children gets sucked into the fun, while Clara and Danny dance around her blatantly obvious lies (which I thought he surely would have figured out last week) and Danny and the Doctor barely look at each other. 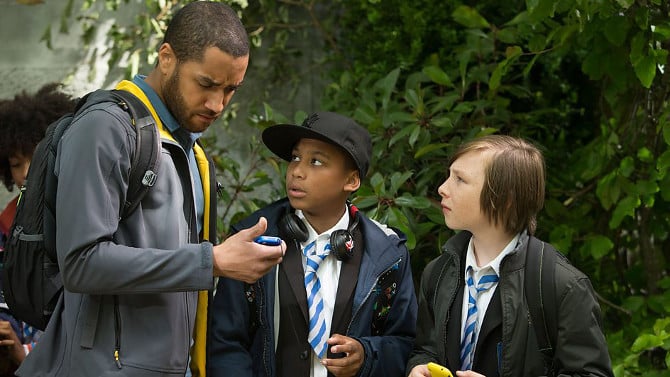 Samson and Bradley with Danny Pink In the Forest of the Night. Credit: Doctor Who/BBC

Doctor Who is supposed to be family entertainment, so I’ve no problem in principle with kids on the show. But why do they have to so frequently be so unrelentingly annoying? The boys, Samson and Bradley (played by Jaydon Harris-Wallace and Ashley Foster), acquit themselves quite well. The bit where Samson says, “I slightly want my Mum too” is a genuine laugh-out-loud moment delivered with nice comic timing from the young actor.

But, those girls. The perfectly accented diction and round stage school eyes are utterly ridiculous, particularly when the lads in the group appear to come from more than one background. It’s like Maebh and Ruby walked straight out of the pages of Enid Blyton and wandered bewildered into a group of modern kids, where they proceed to enunciate every word clearly and almost emotionlessly. Ruby manages to rise above the parapet once or twice, but Maebh, the main kid character, is utterly grating. (Sorry kids).

Meanwhile, there’s the Danny/Doctor/Clara thing. We keep getting set up to believe that there’s going to be some sort of blow-out with these three and then being bitterly disappointed when everyone just doesn’t bother.

First Clara was angry with the Doctor and promising to never go anywhere with him again, then she wasn’t. The Doctor was angry with Clara for lying to him at the end of the last episode, but barely seems to remember this time. Danny has every right to be spitting mad at Clara’s pathetic lies, especially since he rubbish-ultimatum-ed her about lying to him about the Doctor in an earlier episode, but he just brushes the whole thing off.

“I deserve the truth,” he says, “but go home and do your marking first and here’s a snog to prove that absolutely nothing has changed between us despite this betrayal of my trust” – or something along those lines anyway.

Finally, there’s that ending. Out of nowhere, Maebh’s disappeared sister reappears without explanation, rhyme or reason in a cloying finale made all the more sickly by the rubbish acting from both Maebh and her Mum (sorry ladies). Did the trees bring her back? Was she just a teenage runaway? Why is she showing no signs of whatever she’s just been through, but just smiling benignly? Why tack on such a ghastly happy ending at all?