Wanna see how Russia et al hope to shape the internet? ITU opens up (a little more) to public

Unfortunately you now have to make sense of the documents 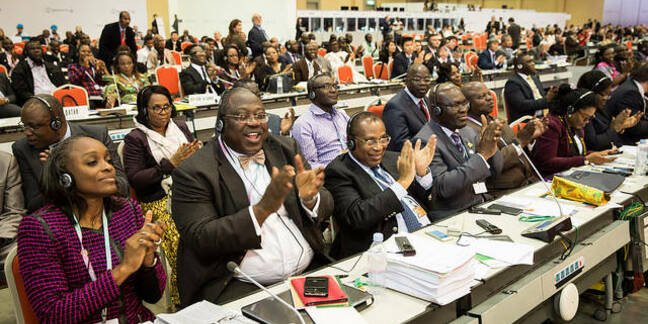 Having tried and failed for a decade to understand and influence the internet, the International Telecommunications Union (ITU) appears to finally be grasping the fundamentals of the open web.

Currently meeting in Busan, South Korea, at its three-week Plenipotentiary held every four years, the UN agency has formally decided to open its documents to the public, breaking a long and outdated tradition of only making them available to paid members.

It is also webcasting meetings and has made further efforts to incorporate non-government representatives into discussions.

The changes follow years of outside pressure, particularly the well-organized leak of documents from the ITU's last big conference, the World Conference on International Telecommunications (WCIT), which was held in 2012.

At WCIT, a number of proposals to give governments more powers over the internet led to concerted and very public efforts to introduce greater transparency into proceedings, which continued up to last week.

Those efforts appear to have paid off, and now all inputs and outputs of the Plenipotentiary are available for review and download. Last week, a special "TIES account" (standing for 'Telecommunication Information Exchange Service') with an individual (and tracked) username and password was required to gain access to everything from meeting agendas to member state proposals.

As of yesterday, all controls have been taken off so you are able to download and read proposals by the Arab States to give governments the exclusive right to decide "public policy issues". Or how Russia wants to make the ITU a provider of internet protocol addresses.

Don't expect the ITU to become easier to follow, however. Most countries need teams of people expert in how the organization works, who download and read the reams of documents in order to understand what it going on.

As the meeting progresses, new documents are turned out at an alarming rate – and trying to correlate live discussions with documents is something that even seasoned ITUers find difficult.

In order to make the process manageable, several years ago the ITU developed a piece of desktop software to automatically download the latest documents. That program requires a TIES account and has not been updated yet to allow for ready access, so if you are interested in reading what the world's governments want to do with global telecommunications, you will have to go to individual web pages and download them (or just head over to Wcitleaks.org/#Plenipot).

There remain significant gaps in the ITU's policy, however. So far it only applies to the Plenipotentiary meetings, whereas much of the ITU's work continues to be done behind closed doors in the intervening four years.

In addition, only the main sessions will be webcast whereas most of the real decisions are made in small working groups and closed sessions (as people discovered at WCIT). And while the ITU is making efforts to incorporate civil society and other non-government members, it is still ultimately only the world's governments that have the right to talk during sessions and make final decisions.

Endorsed by Heads of Delegation + approved in Plenary, all #Plenipot14 input+output documents are publicly available http://t.co/FiTHFstLSV

Nevertheless, the unanimous decision by member states to open its documents – pushed, we understand by outgoing Secretary-General Hamadoun Toure – demonstrates that the organization is capable of change, albeit at a painfully slow rate. ®