Pic NASA boffins witnessed another major solar flare on the Sun on Friday - the fourth such activity in the past week erupting from the biggest sunspot in nearly 25 years.

This particular flare was classified an X3.1, meaning it was pretty damn intense.

The latest powerful burst erupted from a particularly large active region on the sun that boffins have labelled AR 12192. That sunspot represents the most substantial activity on the fiery object at the centre of our Solar System in 24 years.

Harmful radiation from a flare cannot pass through Earth's atmosphere to physically affect humans on the ground, however - when intense enough - they can disturb the atmosphere in the layer where GPS and communications signals travel.

Any flare classified as X-class is serious business, but this one pales in significance compared with an X28 flare measured in 2003 during the Sun's last solar maximum period.

"The biggest X-class flares are by far the largest explosions in the solar system and are awesome to watch. Loops tens of times the size of Earth leap up off the sun's surface when the sun's magnetic fields cross over each other and reconnect. In the biggest events, this reconnection process can produce as much energy as a billion hydrogen bombs," NASA said. 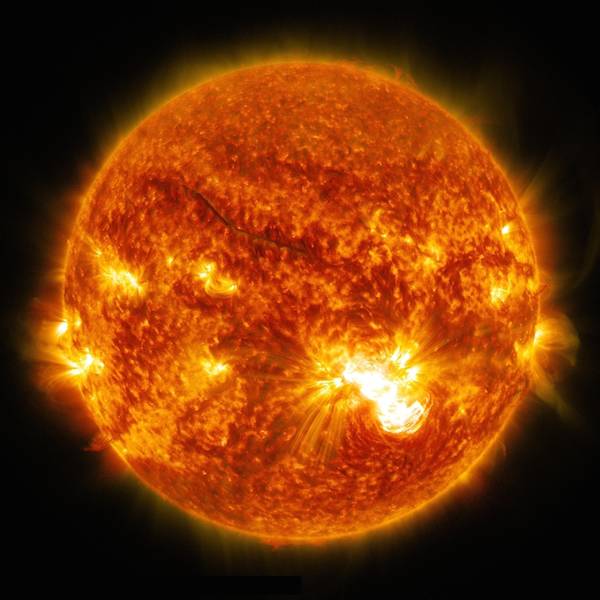 One hell of a mighty belch! This is what an X3.1-class flare looks like. Image credit: NASA/SDO

"If they're directed at Earth, such flares and associated CMEs [coronal mass ejections] can create long lasting radiation storms that can harm satellites, communications systems, and even ground-based technologies and power grids."

The latest solar flare led to an hour-long radio blackout being reported by the US space agency's weather prediction centre. ®

US Military enlists radio hams to simulate fight with THE SUN

The Sun ERUCTATES huge ball of GAS at 4 MILLION MPH

Pics & video Nothing to worry about, however – at least for a week or so

Storm brewing after three days of chickpeas and eggs

Latest telescope could spot our doom

Our Sun menaces comet 'of the century' ISON with FIERY DESTRUCTION