Page File El Reg bookworm Mark Diston peruses the pick of publishing this week and finds he prefers Russell Brand when he's on the page rather than on the telly, as the media messiah offers more words of wisdom on society's ills. The work of Joy Division's vocalist and lyricist is presented as never before and Daniel Handler, known to many as Lemony Snicket, has an intriguing tale of the high seas to tell.

There are few individuals who can polarise opinion like Russell Brand. My landlady wants to shag him to death, whereas I yearn to see him star in an ISIS snuff video. That reason alone made it essential to review Chairman Brand’s little red booky wook: Revolution.

The first advantage of consuming Brand via the page, rather than the TV, is evident: you don’t have to look at him or listen to his voice. Comedians' books are nearly always hit-and-miss affairs; great stand-ups such as Frankie Boyle have corpsed badly even when utilising similar material, i.e. their autobiographies.

I have never found Brand the comedian at all funny. However, it is immediately apparent that the boy can write in a direct and engaging style. It is easy to compare Brand’s book with Owen Jones’s The Establishment as they seem to have teamed up into a Blair and Brown double act recently: Russell charms them, Owen does the politics. Yet Owen plays the politicos at their own game and has all but joined the establishment he eschews.

Brand is a different character entirely, having come from closer to the wrong side of the tracks rather than Jones’s upwardly mobile Fabian background. Brand has the advantage of a very different perspective that you need to have been down to see:

and that his current celebrity is: ‘The accumulation of a million easy treats, a license to speak your mind or sulk”

Brand is what you might call a broad rather than a deep thinker. There are a few pithy one liners such as the one that dismisses the current establishment as: “A cartel of Etonian skanks” 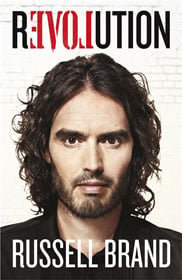 And amusing disclaimers like: “Legally though, I’m obliged to say that Hitler and Murdoch are two distinct entities and that Hitler is a worse bloke.”

The narrative veers from the banal ...

“If we’ve learned anything from Blackadder it’s that history is a shithole” and ... “The Arab spring we were all so excited about on Twitter turned out to be fuck all”

“I remain uncharmed by the incessant rationalism that requires the spirit’s capitulations.”

Russell Brand is a practitioner of transcendental meditation and in many places he seems to be stuck between the media and the Maharishi. His sources are eclectic to say the least, everyone from Guy Debord to Alan Devonshire gets a mention.

Brand is aiming for a very spiritual and holistic revolution, quoting Swami: “All desire is the inappropriate substitute for the desire to be at one with God.”

Brand exhorts us: “The revolution cannot be boring” and there are a couple of classic pieces of satire: “I know the only productive attitude to have towards a paedophile is one of loving, inclusive, rehabilitative tolerance, how can I not afford the same stance to George Osborne? Well, he has fucked over more kids than the average nonce.”

In practical terms, Brand extols the Spanish and Cuban revolutions, quoting George Orwell – regarding the halcyon days of the anarcho-syndicalist Barcelona – yet he neglects to quote the same author when the anarchists, communists and Trotskyists were at each other's throats a few months later.

Revolution is woolly and confused. Russell Brand comes over as something of a Marxist-Lennonist. A follower of Groucho, rather than Karl. Nevertheless, his thinking, however naïve, is refreshing and out-of-the-box. Although I won’t be competing with my landlady for access to Russell’s charms, I did end up thinking he was somewhat less of an arsehole after reading this book.