Since Arrow has been such a success for DC Comics and Warner Bros Television, a spin-off has been created in the form of The Flash, Central City’s speedster superhero.

After already testing the water with a little teaser in last season’s Arrow, Grant Gustin takes on the Barry Allen version of The Flash, complete with his role as forensic scientist with the police (handy for knowing about crimes and stuff) and a whole host of intriguing secondary characters. 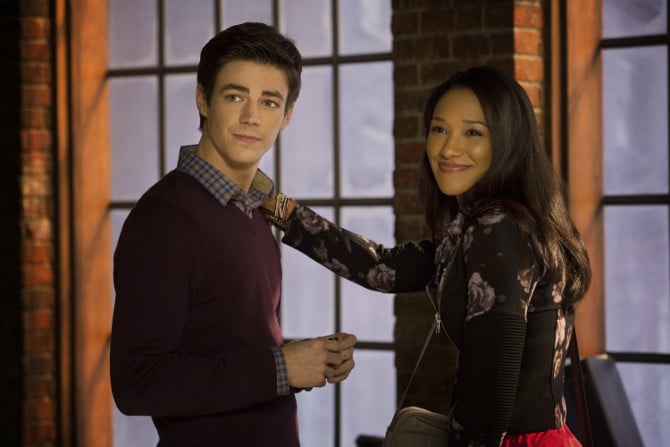 Iris: "Ha, ha! We're like brother and sister!" Barry: "No we're not." Barry Allen and Iris West in the pilot. Credit: The Flash/Warner Bros Television/DC Entertainment/Sky

The thing that’s worked so well with Arrow has been the multiple story threads. Not only does Arrow’s civilian alter-ego Oliver Queen have a crazy family and a multinational company to worry about, plus relationships, superhero-disguise-angst and support staff as the Arrow, he also has the flashbacks to the five years he was missing.

Most of these have taken place on The Island, a harrowing place that made him the hardened-ab archer vigilante he is today. These flashbacks usually inform somewhat on whatever’s going on in the now, but they’ve also been self-contained thrilling tales of their own that ensure the pace never lets up. 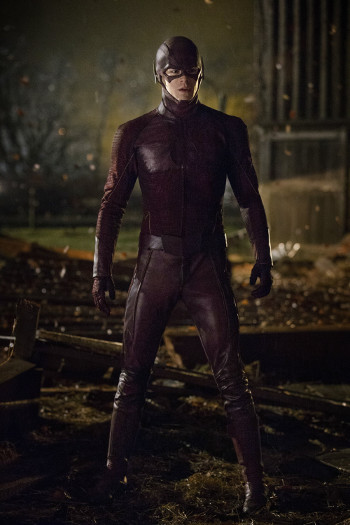 Barry Allen has a similar litany of potential storylines, most of which are highlighted in the pilot. He also has his sidekicks, in the form of the staff of S.T.A.R. Labs, the scientific endeavour responsible for the particle accelerator explosion that gives him his powers.

There's also Dr Caitlin Snow, bioengineering expert and grim ice queen (thanks to the death of her fiancé during the explosion) and Cisco Ramon, mechanical engineering genius and cheerful Q-type character. Here he’s also under the watchful eye of Dr Harrison Wells, the rather mysterious wannabe mentor to Allen now that his reputation as a scientist is trashed – folks not really being too fond of people who build particle accelerators in the middle of cities and then let them blow up.

As if one mentor wasn’t enough, Allen gets his surrogate father figure Detective Joe West at work, who took him in after his own father was wrongly imprisoned for the murder of his mother. Along with West, the office has potential nemesis Eddie Thawne, West’s partner and rival for the hand of the lovely Iris West, daughter of West, kind-of sister to Allen, yet also his secret crush. (Confused yet?)

Keen Flash fans will find that some of these names ring a bell from the DC Comics world, although Arrow hasn’t stuck rigidly to the canon, so it’s likely that The Flash won’t either. Whether you know the names or not, each story thread fairly thrums with possibilities, keeping the pilot zipping along nicely. Unlike Gotham’s opener, which felt like an endless roll-call of players, characters here feel a lot more real, even in the very few moments devoted to each one.

Only the utter blindness of Iris to Barry’s love and her predictable fall into the arms of Thawne are a bit tired. This is the usual superhero formula - to have the girl of his dreams hanging around but initially unattainable - but it’s boring and if you’re going to update things, this is the sort of thing that could easily go. 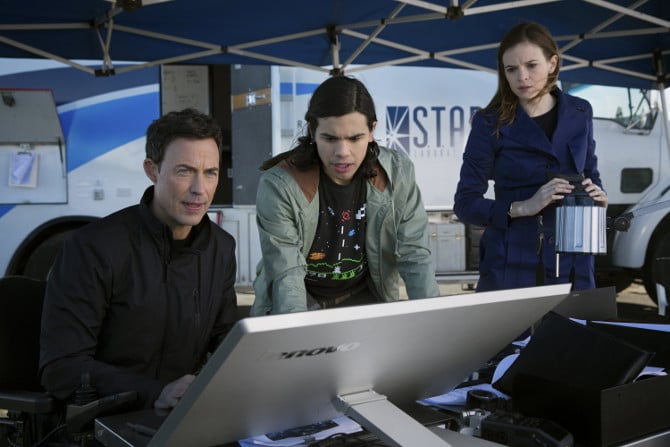 The scenario isn’t helped by the fact that Dr Snow, who gets less than half the screen time of Iris, is instantly more interesting than her, or that her father keeps going on and on about how much she needs protecting. Let’s hope Iris isn’t going to spend all her time screaming at the top of her lungs while awaiting rescue, because this sort of character just doesn’t translate well to the modern world. You can imagine such a person existing right now, but it’s tough to imagine a handsome, intelligent superhero being interested in spending time with them, particularly when he spends the rest of his time with a smart, beautiful scientist.

But this is the only potential snag in an otherwise highly enjoyable pilot. Just like Arrow, The Flash promises to fully embrace the slight cheesiness of the DC world and not take itself too seriously, while pumping up the action and peopling Central City with beautiful people.

Mysteries already abound, characters are fun and best of all, Grant Gustin is a damn near perfect Barry Allen. The Flash is a hero from the Captain America mould - sweet, honourable and honest - and Gustin manages all that with a dash of real charisma as well. Any fan of Arrow will be delighted to add another bit of popcorn TV to their regular viewing schedule. ®

The Flash debuts on Sky One in the UK on 28 October and is on The CW in the US.