'It's NOT a fishing expedition', say police over random spot checks on gun owners

Random spot checks WILL take place, confirm the police themselves

Some people in the shooting community are still insisting that this is not a random spot check campaign, pointing to the new part of the Home Office Guidance on Firearms Law (PDF, 255 pages) which states that visits are only supposed to take place “based on specific intelligence in light of a particular threat, or risk of harm”.

Consider, then how Cheshire Police has decided to implement it:

This week sees the start of a 3 month campaign of checks on firearms license holders in Cheshire to ensure that all guns are kept safe and secure. Nationally over the last five years a total of 3296 licensed firearms and shotguns have been reported as stolen or lost. However, the annual number lost or stolen has fallen from 553 in 2009 to 415 in 2013...

El Reg notes that these statistics are incorrect and potentially misleading, in that they claim that double the number of firearms were stolen than is actually the case. Readers are encouraged to check the link to see ACPO's response to having their stats debunked.

Officers will be making these unannounced security checks on shotgun and firearms certificate holders around the county over the next three months.

Visits by Firearms Enquiry Officers will also be made to all gun clubs in Cheshire during this time to alert them to the campaign and encourage their members to ensure weapons are stored securely.

A canned quote from Chief Inspector Sarah Edgar gives the lie to the “intelligence led” aspect of these spot checks:

We will be visiting some registered certificate holders taking into consideration crime patterns within the area to check that weapons are not easily accessible to criminals.

In other words, the “intelligence” justification has nothing to do with the firearm certificate holder's own attitude towards security; merely living in a dodgy neighbourhood is now enough to get the cops turning up on your doorstep, even though you yourself have absolutely nothing to do with the crime wave.

Given that a large part of firearm storage security is effectively security through obscurity, the arrival of police on one's doorstep is hardly going to enhance the security profile of lawful gun owners. Those of us unfortunate enough to live in neighbourhoods plagued with curtain-twitchers may as well give up now and stick a large sign in the window with “GUNS STORED HERE” written on it.

The UK NRA have issued advice to their members that recommends firearm and shotgun certificate holders "maintain the elementary co-operation with the authorities expected of all FAC holders" - while making it clear that "the police have no right of entry under the Firearms Acts in these circumstances, and members should not be afraid to refuse a request they consider unreasonable."

Regular readers of the Downrange column will remember how, a few weeks ago, El Reg covered the introduction of Operation Solitaire, an initiative that was supposed to educate the licensed firearms community how to spot criminals attempting to join rifle clubs and obtaining access to firearms.

A source has been in touch and showed us a copy of an invitation to attend an Op Solitaire briefing. We reproduce it below: 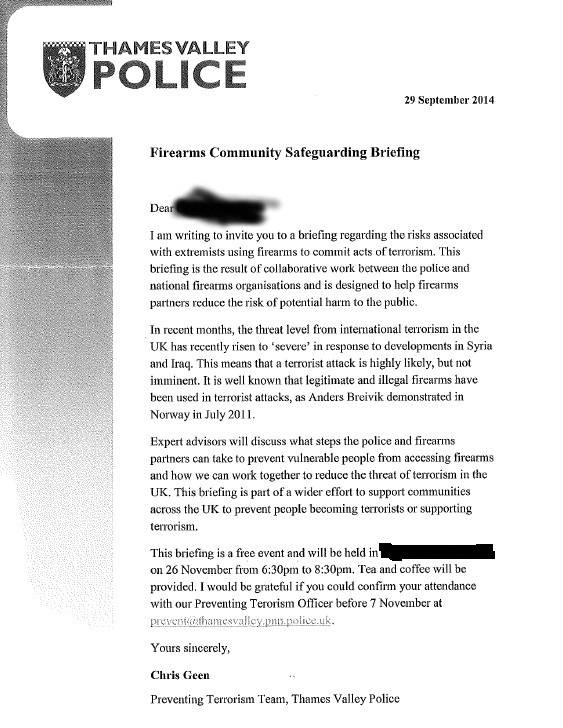 It is well known that legitimate and illegal firearms have been used in terrorist attacks, as Anders Breivik demonstrated in Norway in July 2011.

Citing a terrorist atrocity that happened in a foreign country with a totally different approach to firearms licensing, particularly background checks and ongoing monitoring, as justification for telling the licensed firearms community that they're to blame for this sort of thing is utterly absurd. Your correspondent hates the overuse of the word “offensive” in recent times, but hell, this is offensive trash which all but places the blame for police failings onto the public.

As we noted in our previous report on Op Solitaire, the national shooting associations did not wish to comment on the material presented in the Solitaire briefing as they hadn't seen the final version, just a first draft. Again, as we saw earlier this week, the police appear to be playing fast and loose with the facts to justify what appears to be little more than someone's pet project.

We will be bringing you more on Op Solitaire in the near future.

If you've attended a Solitaire briefing, or want to talk about it in confidence, click the author's name at the top of the story and drop us a line in confidence. ®

*Mushroom - kept in the dark and fed on shit.

The spice data must flow (and it will – just through SCCs)

Plus: Cali uni that paid $1.4m to crims had decent backup software, but they didn't use it on the affected systems