Street artist defends someone else's right to use his name 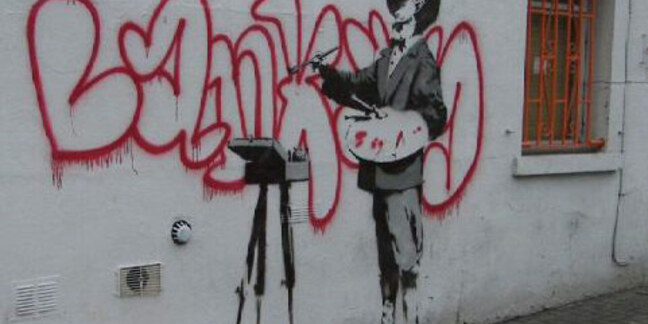 Street artist Banksy is renowned for satirizing society through the unexpected, and a battle over his namesake dot-com domain seems to have provided him with another opportunity.

We reported earlier this month that the anonymous artists appeared to have gone corporate, filing a trademark infringement case against the owner of Banksy.com.

That case was dropped yesterday by the domain arbitrator WIPO with no explanation:

We hereby confirm that, in accordance with the Rules for Uniform Domain Name Dispute Resolution Policy, the administrative proceeding is terminated as of October 28, 2014.

We shall refund any fees paid by you to us, less a USD 500 processing fee, as specified in Annex D of the WIPO Supplemental Rules for Uniform Domain Name Dispute Resolution Policy (http://www.wipo.int/amc/en/domains).

Reimbursement will be made by the same method as your payment.

What happened? Had Banksy been embarrassed into pulling his case? Did he realize he would likely lose? Had he woken up one morning, looked in the mirror and seen he had become what he most dislikes?

Actually no. It turns out that the complainant in the case – which presented itself as "Banksy Inc." and put the complaint under the name of the artist's “authentication company," Pest Control Office – was an impostor.

How do we know? Because Banksy read the story, knew it wasn't him, and so fired off a letter to WIPO explaining that the complaint wasn't legit.

In an email to The Reg, Banksy spokeswoman Jo Brooks spelt it out: "The truth of the matter is as follows: The UDRP application was submitted by Banksyinc who claimed to be representing Pest Control but in fact were impostors. Banksyinc have now been forced to drop their UDRP application against Banksy.com."

We have confirmed the details with the domain's owner, who told us: "The case was dropped with another party claiming to be the real owner of what we are calling the Bigfoot trademark of urban legend. The people who filed it withdrew it."

So there you go: Banksy used his trademark to protect someone who is using his trademark. You couldn't make it up. ®

The case of the missing 300 Swiss francs: WIPO fires CIO following probe into allegations of fraud