Where Samsung has put the ball firmly into the back of the net is in keeping the size and weight down. At 132.4 x 65.5 x 6.7mm and 115g the Alpha is smaller in all ways and lighter than the iPhone 6 which shares the Alpha’s screen size of 4.7 inches. 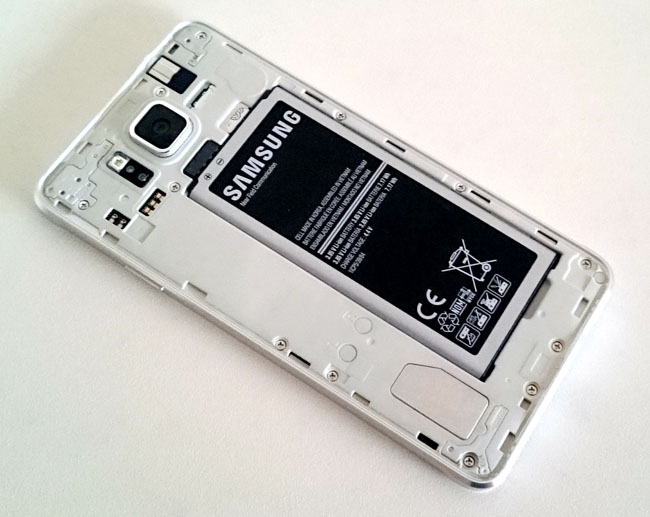 Battery can be swapped out but the storage is fixed

The comparative lack of screen bezel is one of the strong points of the Alpha’s packaging. It is as a counter to the ever increasing size of high-end Android smartphones that the diminutive Alpha makes the most convincing case for itself.

That weight has been achieved at the expense of battery capacity though. Touting only 1860mAh cell (granted, that’s 50mAh more than the iPhone 6), the Alpha is a handset that will get you through a full day easily enough but not with a massive amount of juice left for emergencies. With the likes of the Xperia Z3 boasting a 3,200mAh battery and an easy two-day plus run time, you will really need to consider this matter carefully. 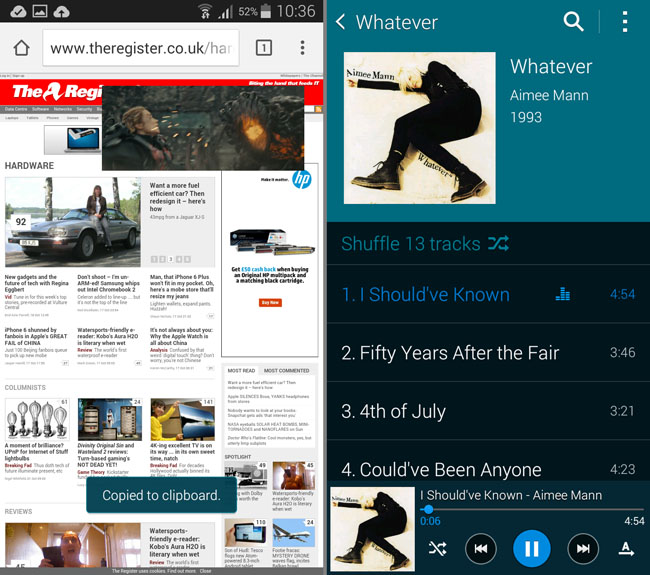 Loop a 720p MP4 file and you will drain the Alpha dry is just over nine hours. That’s not unusually bad, but nor is it especially good. Why a 720p file? Well, if you expected the Alpha to boast a 1080p or a QHD display look away now.

The Alpha’s screen is a 720 x 1280 affair with a count of 312 pixels-per-inch. That’s an irrelevant and indiscernible 14dpi less than the iPhone 6. Numbers aside the Alpha’s Super AMOLED panel is tip-top. The diamond PenTile matrix looks crisp and sharp even under the magnifying glass and though the panel is not quite as bright as that fitted to the Galaxy S5, it’s more than up to the job of being agreeably legible in direct sunlight. 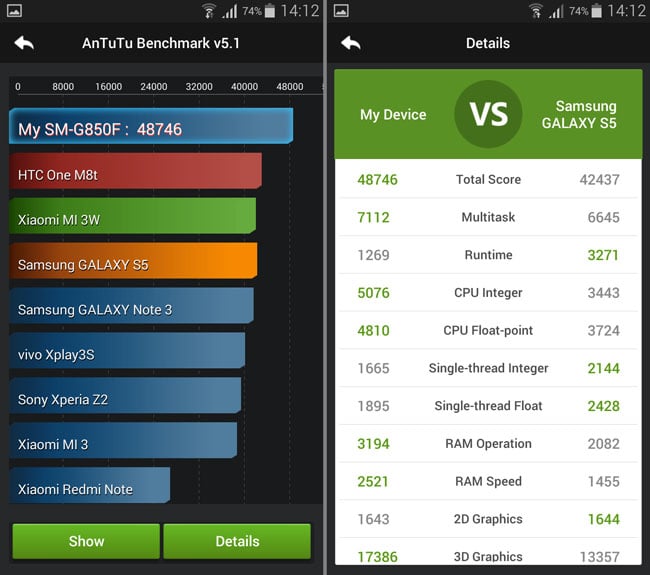 Rather than an off-the-shelf Qualcomm chipset, the Galaxy Alpha uses Samsung’s own Exynos 5 Octa 5430 component which features a big.LITTLE chip with four Cortex-A15 cores and four Cortex-A7 cores clocked at 1.8GHz and 1.3GHz respectively. Also putting its shoulder to the wheel is a hexa-core Mali-T628 MP6 GPU which shares the 2GB of RAM. That’s a potent little rig that ponies up some serious performance.

The Alpha’s AnTuTu benchmark score of 48,700 is the highest I’ve ever seen returned by an Android device, while the SunSpider browser test scored well at 651ms. In short, then, the Alpha is one of the most powerful smartphones money can buy. 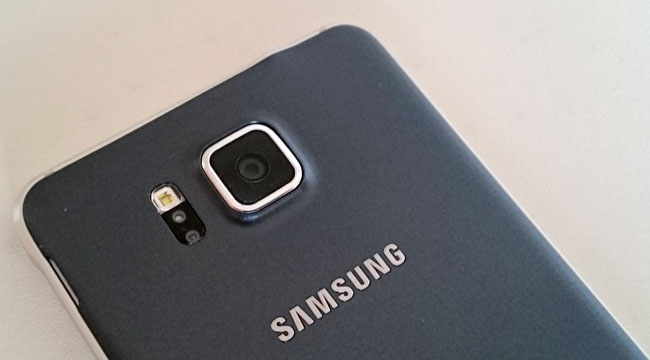 Plastic back and the camera does bulge a bit

The ancillary features are pretty good too. The 12MP (4608 x 2592) main camera is very competent, if not quite as good as the Galaxy S5’s 16Mp snapper and it can shoot video at 2160p/30fs. The 2.1Mp webcam has the iPhone 6’s 1.2Mp affair well beaten if you are all about the selfie. Speaker quality is pretty decent too, despite there being only one.

They’re on track for a whopping three percent in 2026 – well out of the mainstream, but growing faster
Personal Tech4 Oct 2022 | 33