With Samsung’s TouchWiz launcher sitting atop Android 4.4.4, the Alpha’s user interface looks and functions just like it does on the Galaxy S5. That means you get a shedload of extras but also a fair amount of bloat. Worth having are the very good music and video players and the option to run two apps in two windows. I’ve no doubt the Alpha will get an update to Android 5.0 Lollipop but exactly when, Samsung hasn't said at the time of writing. 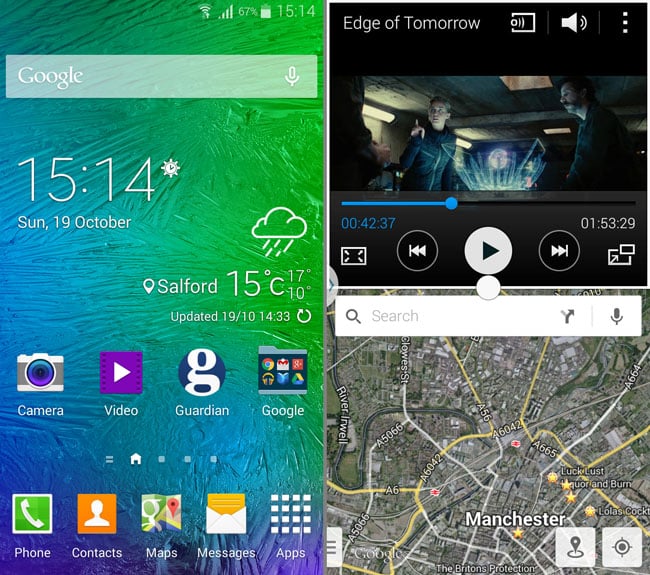 TouchWiz homescreen and two windows in use

Like the Galaxy S5, Galaxy Note 4 and Galaxy Tab S 8.4, the Alpha also features Samsung’s PayPal-approved fingerprint scanner and just like it does on the S5 and S 8.4, it works surprisingly well.

Now for what’s missing. I’ve already touched on the lack of waterproofing, but to add to that there is no MHL A/V output from the microUSB port, so you’re going to need to invest in a Chromecast dongle to throw things onto a bigger screen. 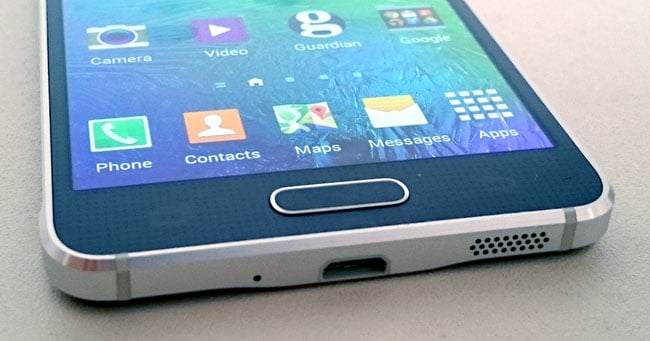 Single speaker and no MHL support from the USB 2.0 interface

Also the microUSB port is a USB 2.0 affair rather than USB 3.0, as found in the S5. Yes microUSB ports for USB 3.0 are larger but on a device with no memory card slot, I still think the extra space would have been worth finding.

I’ve left the biggest issue with the Alpha until last: its cost. At present the Alpha is generally available for much the same price as the Galaxy S5. In fact, EE has it on contract for exactly the same price. In other words the same price as a device with a larger, higher definition screen, larger battery, better camera and a memory card slot. I like the Alpha’s looks, its size and its weight and I could easily live without the memory card slot, but for the same money I’d have the S5, thanks. 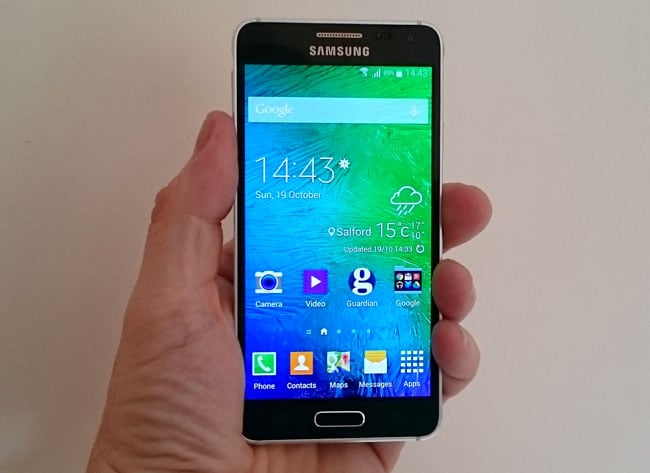 Small, light and easy to hold but a somewhat weighty price tag that's not so easy to grasp

Small, light and kinda funky, the Galaxy Alpha is without a doubt the most aesthetically pleasing phone ever to leave a Samsung assembly plant in the back of a truck. The battery capacity may have been pared back a wee bit too far in the name of saving an extra few grams and the absence of a memory card slot is a little hard to understand, but the chipset is a monster, the display good and device very light and compact.

The problem is that by pricing it to match the iPhone 6 (the 16GB version of which will set you back £539), the Alpha looks like less than great value alongside the Galaxy S5. If it was £80-£100 cheaper and just called the plain Samsung Alpha, I reckon it would sell like hotcakes and perhaps give Apple something to worry about. ®

Thanks to Three for the loan of the review sample.