The Commodore 64 version took a few sidesteps from the original, due to technical limitations, but actually emerged as a playable little game, while Speccy Ghosts ‘n Goblins was basically crap. The Atari ST and Amiga got quite close with the visuals, but gameplay was ultimately not quite there. Bizarrely, the Amiga effort only played music if your machine had 1 megabyte of RAM (most didn’t) while on the ST music could be output through any MIDI musical instrument you dared to plug in – bizarre but amusing. Check out your own ghastly memory here. 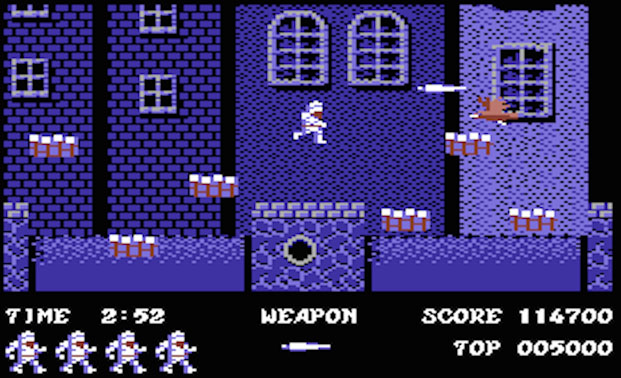 Platforming section on the Commodore 64

Capcom waited for the original’s fuss to die down – and for their advanced CPS-1 arcade hardware to break cover – before releasing a sequel into arcade land in 1988. Of course, the spruced up Ghouls ‘n Ghosts had its fan-base mapped out already, and while it is considered to be ever so slightly easier than the first installment, it still gave gamers a ghoulish thrashing more often than not.

More weapons and power-ups, including some snazzy gold armour, jazzed up the action, with treasure chests now discoverable by jumping in key locations. There were nasty surprises to avoid too: the magician who changes you into a stick-wielding old man, or a thoroughly useless duck. Thus Ghouls ‘n Ghosts could now beat you while onlookers had a good laugh about it. 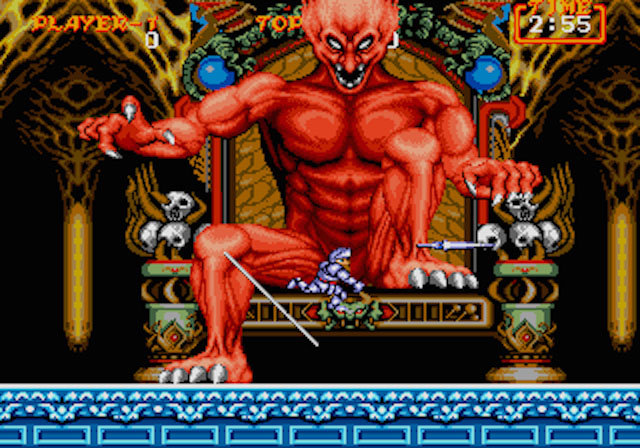 Super Ghouls 'n Ghosts gets serious on the Super Nintendo

UK-based Software Creations produced most conversions for home computers – reasonably faithful attempts, though chipsets like Commodore’s Amiga could certainly have managed superior visuals. Sega’s take on the game for their Megadrive console blitzed them all really, with the then unusual joypad-style controller lending itself well to the action. 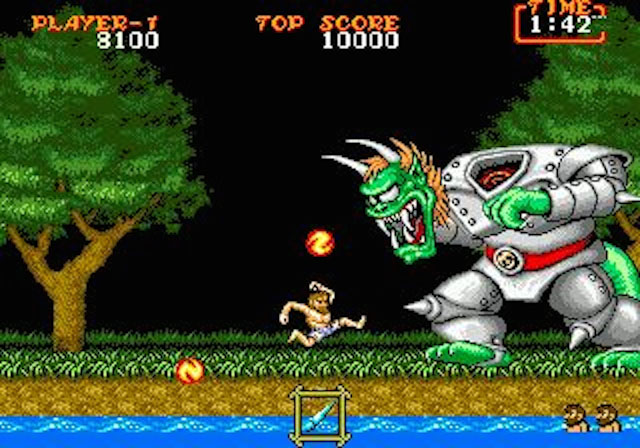 Ghouls 'n Ghosts for the Megadrive

Another few years later and Super Ghouls and Ghosts (1991) appeared on Nintendo’s SNES, showing off the impressive "Mode 7" scaling and rotation effects that console was famous for. Selling over a million units, it became one of Capcom’s biggest selling titles, and ended up on the Playstation and X-Box in various re-released guises. Sticking with tradition, difficulty was distinctly high, with players needing to play through the game twice in order to beat the final beast. 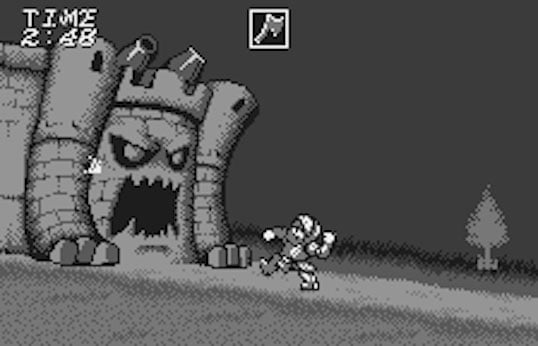 Ghosts 'n Goblins fighting a castle on the Bandai Wonderswan

Despite taking a bit of a hiatus for the rest of the 1990s, the Ghosts ‘n Goblins series came back from the dead for Bandai’s interesting but unsuccessful handheld: the Wonderswan. While not up to the standard of previous titles, it was a decent enough effort, and proved that the series had firmly lodged itself into the psyche of gamers.