Planning to snog a frog, a newt or a salamander and turn it into Prince Charming? Well, think again, princess, because a deadly skin-eating fungus is wiping them out across the world. 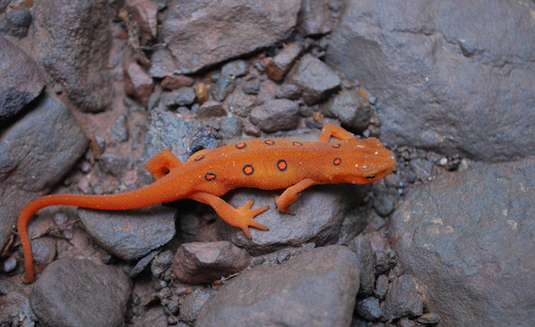 The deadly fungus is called Batrachochytrium salamandrivorans and has already devastated wild populations of fire salamanders in the Netherlands. It infects and eats away at the animals' skin, which they use to breathe, killing them in the process.

A closely related bug called Batrachochytrium dendrobatidis is capable of infecting 520 amphibian species and has sent some species of frogs and salamanders into extinction.

The first of these fungi is lethal to at least a dozen European and North American salamander and newt species. To help track its march across the world, boffins have tested more than 5,000 amphibians from four continents, with the results published today in the journal Science.

Karen Lips, an amphibian expert at the University of Maryland, has taken part in this study and warned that the fungus would soon reach America.

"If scientists and policy makers can work together on this, we have a rare opportunity to stop an epidemic from spreading around the globe with potentially deadly effect," she said.

Dr Lips and a colleague have already screened 1,400 frogs, salamanders and newts from various ponds around North and South America. Although they found no trace of the fungus, "it's a question of when, not if, this fungus reaches North America," warned graduate student Carly Muletz, who co-authored of the Science paper.

Chinese fire belly newts can carry Batrachochytrium salamandrivorans, which is particularly concerning because more than 2.3 million of them were imported into the United States to be sold as pets between 2001 and 2009.

So why should we care about American salamanders? After all, they probably don't care about us.

Well, North America is a hotbed of salamander biodiversity and is home to more than 150 of the world's 655 known species. When sadistic boffins exposed the Eastern red-spotted newt and the rough-skinned newt to the fungus, 100 per cent of the beasts died. If these famous American species are vulnerable, it is likely that many more types of amphibian are at risk.

"We have billions of these newts living in the wild all across the continent," added Dr Lips. "They're highly sensitive to this fungus and could amplify it or spread it to other groups of salamanders. We don't know what the consequences of that might be."

There is, of course, a rapidly spreading disease of more pressing interest to humans - but frog-kissing royals are probably as unlikely to catch Ebola as the deadly salamander sickness. ®