Hacker, Hoaxer, Whistleblower, Spy: The Many Faces of Anonymous

Gabriella Coleman is an anthropologist whose work focuses on hacker culture and online activism. She is the author of Coding Freedom and many articles on hacking.

Gabriella Coleman has done an impressive amount of research into the loose association known as Anonymous and its illegitimate children: LulzSec and AntiSec.

“Commentators often cast Anonymous as an amorphous and formless entity existing in some mythical and primordial jelly.”

She explains how The Electronic Disturbance Theatre (EDT) staged Distributed Denial of Service (DDoS) attacks, which the group referred to as “Virtual Sit-Ins” in the early 2000s, and how many of the future hackers of Anonymous began their careers trolling before assembling on the 4chan imageboard.

Coleman goes on to describe how the group were catapulted from obscurity to infamy after countering the anti-piracy movement in 2010 with Operation Payback, using denial of service attacks, which had first been used by Aiplex Software on behalf of Bollywood against torrent sites. 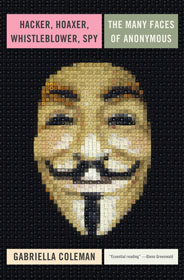 What followed was a copyright war, where Anonymous proved very successful at attacking recording industry sites and the law companies they employed. At the same time, Wikileaks had begun to publish classified US documents provided by Private Chelsea (Bradley) Manning. The ensuing fracas saw Anonymous launching Operation Avenge Assange, targeting the organisations which had cut off funds from Wikileaks.

As Coleman observes: “There is an ocean of difference between tear gas and typing.”

She goes on to outline the role of Anonymous and its offshoots as agent provocateurs in the Tunisian revolution and as a loose knit vigilante organisation combating rape culture in the US.

Coleman describes her situation in 2012, when she is about to give a lecture which dismisses Anonymous, as “the raucous party at the funeral of online freedom and piracy” just as the Edward Snowden leaks are announced and online hacking becomes a national institution. The book ends with a series of high profile hacker trials as the community is confounded by blackmail and double agents. More tales of derring-do follow.

Gabriella Coleman has managed to assemble a coherent and compelling story from many disparate sources. She has avoided the pitfalls which Molly Sauter’s recent book The Coming Swarm has fallen into by fatuously comparing online activists with Thoreau and Rosa Parks. Her literary style is also much more readable than Sauter, whose work reads like a series of ill-conceived college essays.

Hacker, Hoaxer, Whistleblower, Spy is an informative book about a most disparate and nebulous subject. Gabriella does occasionally get a little carried away by the idealism of the “cause”, here describing LulzSec: “They also demonstrated the importance of art, expression, autonomy and creation through unalienated labour” … and I thought they just did it for the Lulz.

At one point she tries to intellectualise the debate and name-drops Nietzsche and Walter Benjamin rather gratuitously. But overall Hacker, Hoaxer, Whistleblower, Spy: The Many Faces of Anonymous is free of intellectual onanism, being down-to-earth, detached and well balanced. Whether Anonymous is “the raucous party at the funeral of online freedom and piracy” is wisely left unanswered. Let us hope not.