Trick or treat; BAMBI'S GOT BITE!

Just as the kids in the US are taking to the streets for spooky fun and sugar overloads on Halloween, scientists have rediscovered a long-forgotten species of deer that might just freak you out.

The Wildlife Conservation Society (WCS) said its researchers had documented a species of musk deer continues to live in remote parts of northeast Afghanistan.

The Kashmir Musk Deer was last spotted in 1948 and was extremely difficult for the researchers to trace, as the deer prefers steep rocky outcroppings and dense bushes.

But what is it about the musk deer that makes the species so unnerving? Well, take a look for yourself: 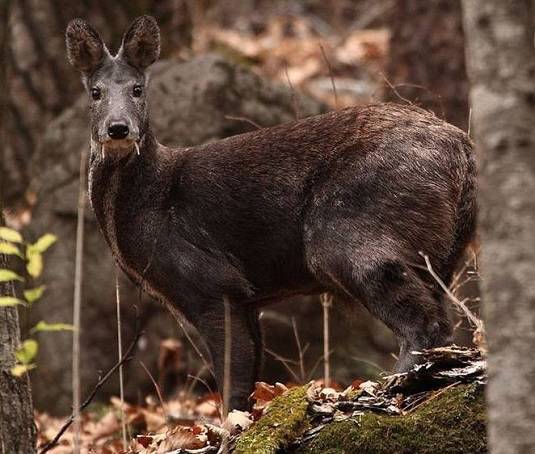 Aww, what a cute little OHMYGODFANGS!

Yes, the cuddly little bundle of wildlife cuteness comes equipped with a pair of full-on vampire fangs. The teeth are not used for feeding by the herbivorous deer but are instead wielded by the males in contests during mating season.

Unfortunately, the scary teeth aren't the only distinguishing characteristic of the musk deer. As the name implies, the animal has a scent glands which are highly sought after by poachers and fetch up to $45,000/kg on the black market.

The WCS said that the preservation of the rare species was important as Afghanistan continues to be mired in conflict.

"This rare species, along with better known wildlife such as snow leopards, are the natural heritage of this struggling nation," said WCS deputy director of Asia programs Peter Zahler.

"We hope that conditions will stabilize soon to allow WCS and local partners to better evaluate conservation needs of this species." ®

2,500 years ago, these folks weren't cremated – but their funeral-goers were absolutely baked: Earliest evidence of pot smoking discovered

Talk about a high profile discovery

Colombia accused of rigging .co contract for dot-org provider Afilias – is this document a smoking gun?

US government told it must give a reason to snub policy