Yes, Samaritans, the law does apply to you. Even if you mean well

How to escape from the do-gooders' creepy Twitter surveillance app

Downrange Earlier this week suicide prevention and counselling charity the Samaritans launched an app that scans Twitter timelines and alerts users whenever anyone appears to be depressed. Yet the backlash against this creepy automated scanning is astonishing – and the Samaritans appear to be ducking their legal obligations.

As we reported earlier this week, the Samaritans' Radar app automatically scans the tweets of anyone the user follows and alerts subscribers to potentially suicidal tweets based on “trigger phrases”.

The creepiness of this is self-evident. A machine will monitor whatever it is you're posting on Twitter and then silently alert people who follow you to your apparent state of mind.

Now, it'd be far too easy to go off into some tired old cant about Orwell, 1984, surveillance and so on, so we'll avoid that. What's really disturbing here is that this app does all this monitoring of you without you even knowing about it. It's one thing to tell your human followers “I'm going for a midnight drive to Beachy Head” in the knowledge that someone will see your cry for help and give you a sympathetic ear.

It's quite another to have a machine capture and store that before quietly telling – well, potentially anyone – that it thinks you're about to roll a self-induced seven.

Your correspondent, ever one for trying to break things, managed to get the app to respond to some (fake) input: 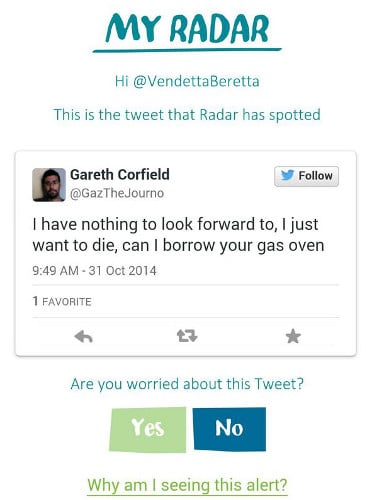 I'm not actually looking for a gas oven, but thank you for the plentiful offers to lend me one

So, instantly I've managed to provoke Radar into flagging up a false positive. Goodness knows what would happen if I was a Smiths fan given to quoting their lyrics; I'd probably be lynched by enraged Twitter followers sick of my tweets filling their inboxes every five minutes.

Isn't this an invasion of privacy? Not quite, though it feels that way

Levity aside, one of the many problems here is that this app is quite a long way away from being able to reliably detect that someone really is feeling depressed and needs someone to talk to. If it prompts a large number of false positives, people will end up ignoring its warnings in a classic Boy Who Cried Wolf scenario.

Another one of those problems is the implications it has for privacy.

Paul Bernal, a lecturer in IT, IP and media law at the University of East Anglia, told The Register: “The whole thing demonstrates a fundamental misunderstanding of the 'private'/'public' issue. We sometimes say 'private' things in 'public' forums; that privacy should be respected.”

Yet the Samaritans themselves argue that if you post your tweets publicly, you (in effect) have no reasonable expectation of privacy. An email sent to your correspondent late on Thursday said:

Samaritans reviewed the data protection issues related to Samaritans Radar during development. It has concluded that twitter account holders post tweets in the knowledge that they are visible to the wider twitter community (for example for a search on key words).

We recognised the fact that some twitter accounts are not public and therefore omitted any accounts that are marked as private. Furthermore the app works in such a way that the output is only seen by the subscriber, who would have sight of it anyway.

The purpose is only to highlight the tweet so that it does not get lost in the general traffic of a twitter feed. Samaritans does not monitor the tweets or even view them.

Privacy isn't the nub of the problem here, though it's a big one. You have the legal right to order the Samaritans to stop their Radar app from processing your tweets. And – contrary to what they claim – you don't have to hand them your Twitter username in order to opt out.

Next page: Ignorantia legis non excusat – and how to order them to stop
Page: