Windows XP market share fell off a cliff in October

Windows XP's market share took a dive – a big one – during October, according to the two counters of OS market share we've been following for a year now.

Why the big dip for XP? Netmarketshare's not offering any explanation for the change, which is comfortably the most marked for any of the OSes it tracks across the two-year series of data it makes available.

To understand just how dramatic the change is, here's all the data Netmarketshare shares, in easy-to-understand-for-us-visually-attuned-humans graph form.

Is that big dip for XP and rise for Windows 8.1 a methodological anomaly? One explanation for the Windows 8.1 surge is that in Q1, 2014/15, Microsoft hauled in US$900m for Surface devices. Reg hacks also hear of substantial Surface sales into business.

This explains the uptick for Windows 8.1 but not the dip for XP.

Perhaps the pretty graph from Statcounter will help? 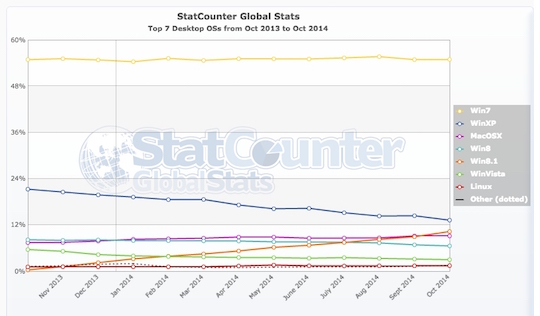 Tables? You want tables? They're getting a bit unwieldy to present as HTML, so here's a link to our compilation.

A last thought: Statcounter has had Windows 8.x's market share ahead of XP's for a while. Netmarketshare now has it at 16.8 per cent, just 0.38 per cent behind XP. It seems Microsoft's latest may finally be about to topple XP, a milestone that speaks eloquently about the Microsoft of the past, present and future. ®