Greeks best in the world – at, er, breaking their mobile phones

Blighty's not much better at preserving Jesus Phones either

Insurance is dull. Mobile phone insurance is doubly so, to spice it up insurance company SquareTrade has published figures for how good people in different countries are at using their phones without falling over.

It transpires that the Poles and Belgians are very good, while the Greeks and Italians are the most likely to have a stumbling accident and damage their precious mobes.

And iPhone users are the most clumsy smartphone users. According to SquareTrade, those British users with faith in the Jesus phone are 37 per cent more likely to have an accident than other smartphone users.

The least clumsy country was Poland, with only 24.3 per cent of users reporting having had an accident in the last two years, followed by Belgium (24.9 per cent) and Switzerland (26.3 per cent). German mobile phone users came a respectable 12th in the list. 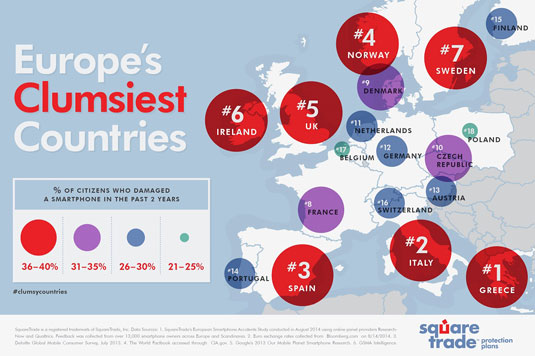 Which countries have the most mobe accidents?

The UK does poorly, in fifth place of the “most cack-handed” list. In the UK, 37.2 per cent of smartphone users had damaged their phones in stumbling incidents in the last two years with over half of all accidents happening in the home.

And it’s not just phones which get damaged. SquareTrade also rang up a bunch of doctors and of the 22 who were prepared to comment, 14 had seen an increase in injuries to people in phone related incidents.

Dr Louise Newson, a British GP, said: “I’ve seen a lot of mobile-related injuries in my surgery in the last 12 months, mostly from people tripping or bumping into something because they’ve been distracted by their smartphone. Some of the injuries are quite nasty.” ®