The next thing to look at are the batteries: 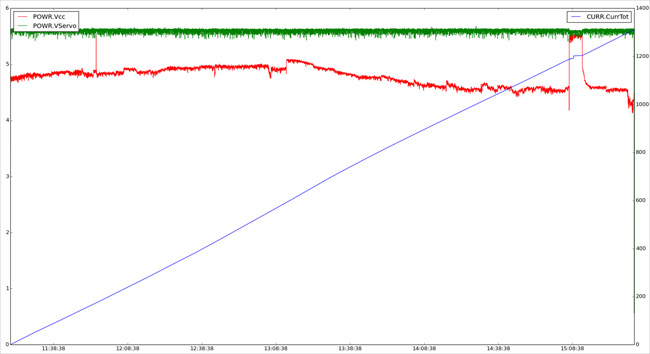 There are a few things notable about this graph. First off, the servo voltage is a bit high. Apparently the CC UBEC was set to 5.6V? It should be set to 5.3V or so I think. We want plenty of safety margin below the 5.7V limit for the servo rail being a backup power supply for the FMU.

The next thing that is noticeable is the POWR.Vcc is quite low. That is normally steady at 5V. Seeing the match to the CURR.Volt value, it looks like this is just diode drop in the power brick, combined with voltage drop in the main FMU power supply with the cold temperatures.

The Vcc stayed well above the level the board can handle, so it is OK, but it sure would be nice to fix the servo rail as a backup supply in case it drops any more. That battery pack dropped to 5.1V (see below), which is quite a drop.

In summary, then, we've got a few issues, but nothing insurmountable. Just when we hoped we'd done the final test flight, it looks like a further jaunt is on the cards, with the following adjustments:

And while we're at it, Tridge has suggested we give the Vulture 2's RFD 900u Radio Modem a run for its money.

We recently installed this long-range kit, which replaces the standard 3D Robotics radio. With its big brother the RFD 900 (at top, above) on the ground, we'll be able to monitor the aircraft live via the APM Mission Planner.

Of course, that opens the possibility of Tridge ultimately monitoring and controlling the spaceplane via VPN from the comfort of his PC in Australia, which is a very provocative possibility indeed.

We'll bring you details of quite how that hook-up works in practice when Tridge and Edge have mulled the practicalities. ®

The simple premise of the challenge is to detect a dummy dubbed "Outback Joe" and drop a water bottle as close to him as possible. As you might imagine, there's some serious work involved in making that happen, so we invite readers to raise the traditional glass to CanberraUAV for a truly impressive feat.

**Not vanity on my part, I assure you, but rather a piece of unprompted backronym tomfoolery by Edge, very much in the spirit of LOHAN.

Samba 4.8 to squish scaling bug that Tridge himself coded in 2009