Microsoft now licensing Windows by the user, across multiple devices

Microsoft has changed the way it licences Windows so that it is now possible to buy licences on a per-user basis.

Explained here, the main effect of the new policy is that a single licence can now apply to different devices.

As Microsoft explains, this new arrangement means it's now possible for employees of organisations that adopt Software Assurance to “use or access Windows Enterprise across all their devices.”

“Gain the simplicity of counting users instead of counting all of their various devices,” Microsoft suggests. Importantly, a device can also be a virtual desktop. Microsoft's not been super-keen on VDI before, but in a BYOD world a locked-down virtual desktop is a more desirable (virtual) device.

Here's how it all apparently now works. 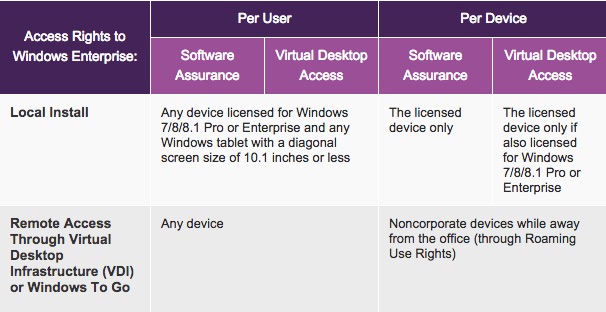 Making a single Windows licence apply to an on-premises machine and a BYOD has impressed analyst outfit Forrester, which describes the new plans as “significant, and good, news” for Microsoft customers, and “a sound move by Microsoft to maintain its dominance of the enterprise desktop market, by making it easier for CIOs to support BYOD programs.as it will make bring-your-own-device rather easier.”

“Those of you who previously rejected BYOD and/ or VDI on cost and security grounds should revisit that decision,” writes the firm's Duncan Jones. “Microsoft enterprise desktops layered on top of various native operating systems just became much simpler and cheaper.”

Microsoft's not posted price lists we can spy, so we're not sure if the price of Windows just went up to cover the fact it's no longer tied to a device. Nor do we know whether this new regime applies to desktop-as-a-service, for which Microsoft currently insists that service providers use a re-skinned version of Windows Server. We've asked the questions and will bring you news as it arrives. ®