And this is why smartglass sector IS A FLOP... for now 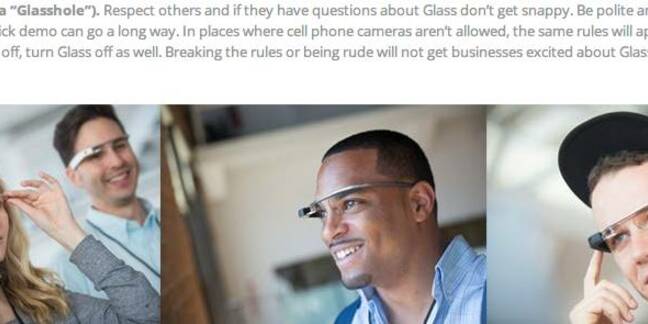 Google Glass and other smart specs are proving to be a flop with sceptical consumers, the analysis firm Juniper has claimed.

Juniper insists the "lengthy time-to-market and lack of a key consumer use case" is to blame for the lack of interest, which we think means that no company has managed to produce enough silicon specs, and even if they had, the public hasn't got a clue why anyone would wear them.

The research company also pointed to a "slow path to social acceptance" for smart peepers. Again, if we can add our own explanation here, this means that currently only the arsiest of Glassholes are comfortable wearing the things.

As for the rest of us, well, we're a bit uncomfortable with having cyborgs for dinner guests.

At the current rate of adoption, smart spec sales will only reach 10m users by 2018.

"Smart glasses continue to raise privacy and safety concerns from many consumers and government bodies," Juniper wrote, adding these "need to be addressed or assuaged before the devices become accepted, although prices and their status as supplementary devices mean that smart glasses will remain niche for the medium-term."

There is hope for Glassholes looking to gain acceptance through shear weight of numbers, as sales in 2015 and 2016 will be "buoyed slightly" by new products by firms including Samsung, Recon Instruments, and the Microsoft-owned Osterhout Design Group.

The development of smart glasses is at the same stage as smartphones in the early noughties, Juniper continued, which means you can play snake and use punctuation marks to draw rude stick men, but not much else.

There is likely to be huge level of investment, but low shipment volumes for at least the next five years.

The report is called Smart Glasses: Consumer, Enterprise and Healthcare Strategies and Forecasts 2014-2019. ®