3D printed guns: This time it's for real! Oh, wait – no, still crap

It turns out you can make a real gun ... from steel and gun parts

So, hype notwithstanding, it's now pretty well acknowledged that you cannot in fact make a useful gun out of plastic in a consumer-grade 3D printer.

The ".314 Atlas" from designer Michael Crumling is not a bullet, which is the projectile which comes out of a gun. It is what's known – outside the US "technology" media, anyway – as a cartridge. A normal cartridge consists of a cylindrical case, typically made of thin brass, which holds the propellant powder that will burn to generate the hot gas which will push the bullet down the gun barrel. 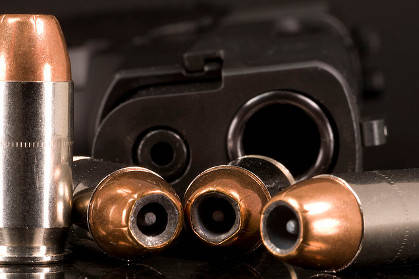 Pistol cartridges (the protruding, copper-coloured bit is the bullet) and a pistol... By "Ken", licensed under CC 2.0

The bullet itself is fitted into the open end of the cartridge case. The closed base of the case holds a primer – a cap – which will ignite when struck by the firing pin, setting off the powder to fire a shot.

A normal brass cartridge doesn't have the strength to contain the expanding powder gases: it doesn't need to as it is slotted into the gun's steel chamber with its bullet poking into the barrel itself. The brass case merely provides what's called "obturation" – it expands under the gases' pressure and seals tightly to the chamber sides, preventing any gas from leaking back out of the chamber.

The cartridge doesn't simply shoot backwards out of the chamber because its base is held firmly in the chamber by one sort of robust metal mechanism or another, depending on the firearm.

All this means that the hot powder gases have nowhere to go, and thus they ram the tightly fitting bullet with tremendous force along the barrel, even though the barrel's rifling is such a tight fit that it is actually cutting into the bullet as it goes, imparting the powerful spin that will make the bullet fly straight.

The tight barrel fit means that the expanding gases cannot leak past the bullet and thus they impart a lot of their energy to the projectile. It also means that the barrel must be strong too, to resist the high gas pressures generated inside it.