Review As has become regrettably typical for the Fedora project, the first Fedora 21 beta is well behind schedule. According to the current schedule on the Fedora wiki, the final version will arrive about a month late, on 9 December. That is if nothing goes wrong during the beta testing phase that's just started.

A month might not sound so bad, but it has been nearly 12 months since Fedora 20 arrived, which is not good for a distro that supposedly updates every six months.

Whatever. Fedora 21, whose beta has just arrived, looks like it will be worth the wait.

This release is chock-full of new features, but the two most noticeable if you grab the live CD will be GNOME 3.14 and support for the Wayland protocol.

GNOME 3.14 packs in a ton of new stuff, especially since the last release of Fedora used the now-ancient GNOME 3.10. Since then, GNOME has greatly improved its support for HiDPI screens, revamped the default theme (which Fedora 21 uses) and reworked its software centre app. It also renamed Totem, so if you're trying to figure out where Totem is, search for it by its new name, "Videos". 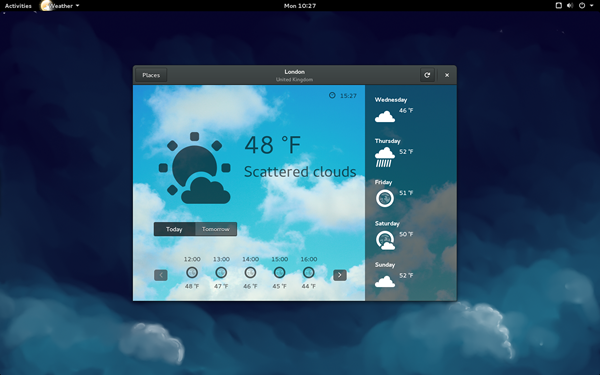 The theme improvements include a completely reworked Weather app (see above) that taps into the new GNOME geolocation API. You'll also find some new Google-based options for online accounts so you can pull in all your photos from Picasa, Google+, or your Android device.

The big news in GNOME 3.14, though, is improved support for Wayland. Contrary to widespread internet belief, Wayland is not a new display server. In fact, it's a protocol. What's new in 3.14 is that Mutter (GNOME's default display manager) can now work as a Wayland compositor.

If you'd like to test out GNOME running under Wayland, click the gear icon on the GNOME login screen and choose the option "GNOME on Wayland". GNOME on Wayland is still very rough around the edges and there are a number of apps that won't work with Wayland (some of which might never be ported to use the Wayland protocol), but I was impressed by the amount of stuff that actually works quite well.

Next page: That's GNOME way to take a screenshot
Page: