Use your best movie voiceover voice to read this

In a world ... when video games were invading every home ... a legendary American company set out to create ... the most lucrative console game of all time ... It failed ... horribly ... and set the gaming industry on a path ... of annihilation.

Atari Inc's 1982 game E.T. The Extra Terrestrial for its 2600 console bombed so bad, it had to take back every unsold copy and a year later bury them in the middle of the desert in New Mexico so as to end the torture of unsuspecting children.

Fast forward to 2014, and an expedition to the desert town of Alamogordo in the US state managed to unearthed the cursed stash.

The demon created by Howard Scott Warshaw was awakened. And now, it's coming for you... on eBay.

That's right, cartridges of the 1980s console megaflop have been dug up from the sands of New Mexico, and are now being flogged as collectors' items online. Prices for the hated title range from $110 to $520.

The game sought to piggyback on the success of the Steven Spielberg sci-fi shlock flick. Unfortunately, the game was awful. Just really, really, remarkably terrible, even by the standards of early 1980s console games. If you don't believe us, there are countless emulators, both software and browser based, that let you run a little green block of pixels around a little green map and randomly fall into holes. 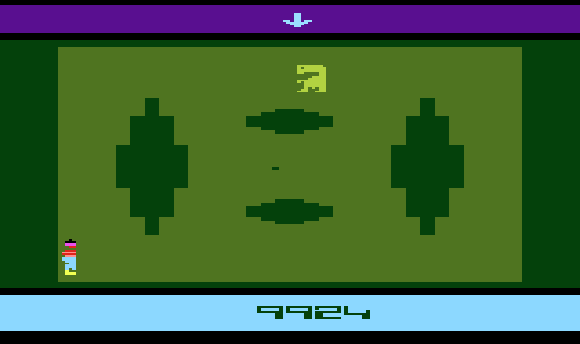 It sadly doesn't get any better than this

When Atari disposed of the unsold cartridges in a landfill (to prevent further resale) the legend of E.T. took a new turn. The home video games market would soon collapse and the Atari game would gain a reputation as a title so bad it had to be buried beneath concrete in the same place they set off atomic bomb tests.

Last year, a documentary crew set out to unearth the fabled Atari dump site and was able to locate a number of old console carts, including a number of the E.T. cartridges now being sold on eBay.

Each of the cartridges (in crumpled boxes) is sold with a certificate of authenticity from Alamogordo that verifies that it is, indeed, an original copy of the notorious dump truck E.T. hoard and was pulled out of its concrete tomb.

The cartridges themselves are almost guaranteed not to work, thank God. ®