'The level of detail is so exquisite'

Boffins have been left in shock after glimpsing the interstellar equivalent of a teenage pregnancy.

The following picture shows rings circling HL Tau, a Sun-like star which is located about 450 light-years from Earth within the constellation Taurus. The circlets are known as protoplanetary discs and will eventually form into planets. 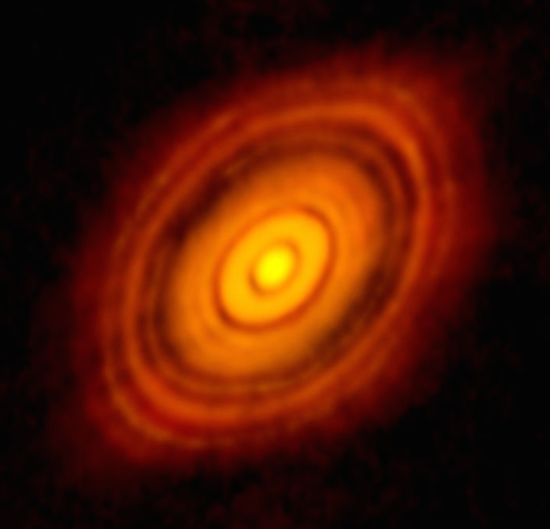 The telescopes which make up the ALMA array can be moved around a plateau in Atacama desert, Chile, allowing scientists to fine tune and zoom their view.

No other image has ever shown the process of planetary formation in such fine detail.

"These features are almost certainly the result of young planet-like bodies that are being formed in the disk," said ALMA Deputy Director Stuart Corder. "This is surprising since HL Tau is no more than a million years old and such young stars are not expected to have large planetary bodies capable of producing the structures we see in this image."

It is believed that stars form within clouds of gas and dust which are squeezed together over long periods of time. The surrounding dust then forms rings which again coalesce into larger particles and eventually great big chunks or even massive planets.

"This new and unexpected result provides an incredible view of the process of planet formation. Such clarity is essential to understand how our own Solar System came to be and how planets form throughout the Universe," said Tony Beasley, director of the National Radio Astronomy Observatory (NRAO) in Charlottesville, Virginia.

ALMA works at much higher wavelengths than ordinary telescopes and was able to glimpse HL Tau by peering through a cloud of dust.

This is truly one of the most remarkable images ever seen at these wavelengths, said NRAO astronomer Crystal Brogan. "The level of detail is so exquisite that it's even more impressive than many optical images. The fact that we can see planets being born will help us understand not only how planets form around other stars but also the origin of our own Solar System." ®