Array with you: Hybrid upstart Tegile kicks out new flashers

Overall the T3000s function as performance-focused alternatives to Tegile's hybrid HA2000 series of products. Positioning the four T3000s is easy enough. they all come in 2U boxes and are ranked on raw entry-level storage capacity.

With just 2TB raw capacity difference between the existing T3400 and newer T3700, you might imagine the older product is effectively replaced, although Tegile doesn't say this.

It suggests there is a 5x multiplier across its range to reach the effective capacity after deduplication and compression, but that depends upon the application's data characteristics. You might get less, or more even. 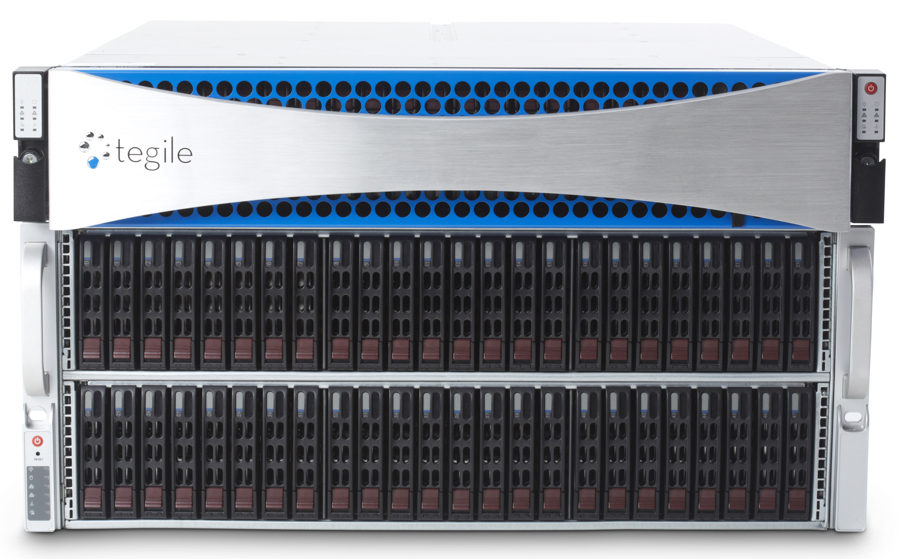 The company has updated its IntelliFlash management software to v3.0, shortening some provisioning times by 50 per cent, adding encryption for data at rest with self-encrypting drives, and the optimisation of app performance profiles. It's also improved support through its IntelliCare service.

El Reg: How can Tegile, with its SSD use, equal the efficiency of Violin arrays with Violin's deeper knowledge of flash from its VIMM technology?

Rob Commins: Violin invested to develop flash controller technology (VIMM) at a time (since 2005/2006) when enterprise SSD controller technology was still nascent. Their controller design focused on flash wear levelling and system-wide garbage collection which together deliver good endurance and consistent latency from consumer MLC flash. Consistent latency under load is achieved by orchestrating garbage collection and RAID in tandem.

Over the last five years, SSD flash controller technology has dramatically improved to deliver high resiliency and endurance per SSD. The SSDs that Tegile procures from HGST and SanDisk are eMLC (enterprise MLC). These drives are rated for 3 to 5 drive writes per day and have an order of magnitude more flash endurance (30,000 P/E cycles vs. 3000 P/E cycles per flash page) than [the] consumer MLC flash that Violin uses.

These lower-level flash optimisations enable our systems to deliver excellent performance on flash. Add to that our highly optimised data reduction (compression and dedupe) with our Metadata Acceleration techniques and a full complement of data management (snapshots, clones, replication, thin provisioning, etc) and Tegile systems deliver tremendous value to customers.

Rob Commins: As stated above, Violin’s focus since the early days has been on building great hardware. The data management software has been an afterthought. Hence the need for a three-box solution. The two additional boxes (standard Dell servers) act as controllers which run software that they acquired ... from a storage software company. So, they have slapped on data management software and have done little-to-no-optimisation to truly leverage their hardware uniqueness.

Tegile, on the other hand, has focused since the beginning on extensively leveraging x86 CPUs and optimised its IntelliFlash software for data layout, RAID, data management and data reduction to handle the nuances of flash. Hence we are able to deliver an all-flash array (in a single box) with a comprehensive portfolio of data management.

The benefit to the customers:

Rob Commins: We are growing quite rapidly (new customers, more repeat business, larger and more systems installed, new geographies, more sales and marketing teams, R and D expansion) and we certainly expect to raise more capital to build and scale our business. We are scaling to build a sustainable business that delivers tremendous value to our customers, investors and our employee base.

Rob Commins: With a comprehensive product line architected for flash, we have several advantages over the listed competitors. Most significantly, unified access across block and file protocols that are not layered, but peer each other, and in-line deduplication and compression acts as an efficiency driver as well as a force multiplier in performance, and an extensible architecture that will implement faster performance and more efficient media in our performance and capacity layers, respectively. Having both all-flash and hybrid systems running on the same IntelliFlash OS is also a material differentiator.

El Reg: Can the hybrid and all-flash Tegile products be combined in some way, such as a cluster? What benefits does that bring?

Rob Commins: Absolutely! Every system can accommodate flash and HDD. You can start with an all-flash array and should you choose to add HDD shelves to it at a later point in time, you can easily do so. Carve out some flash from the existing pool and use that as the “high performance layer” for the HDD pool. It’s extremely easy to dial up or down flash in our Intelligent Flash storage arrays. You can start with a hybrid system and decide to add a shelf of SSDs only and create pools of All-flash storage.

Rob Commins: We have that capability today. For hybrid you can add more HDDs to change the ratio of flash to HDD.

For all-flash, you can use higher-performance flash along with dense flash to further optimise for latency and economics.

El Reg: What does Tegile think of hyper-converged offerings with virtual SANs/filers?

Rob Commins: There is clearly a market for converged offerings. We believe that converged offerings tend to be specifically use-case focused and for smaller sized deployments. For larger scale consolidation, customers still want to deploy storage separately from compute (and virtualised software platforms).

Tegile is deadly serious about taking on all-flash array startups and mainstream suppliers from its hybrid array base. Kudos for chutzpah. The product messages Commins supplies are solid and if the products perform as well as he says with the price/performance he says apply, then they should rate highly in customers' thinking.

Early success with these new products should galvanise the raising of additional capital which would translate into faster business infrastructure and product development. ®

Founder of firm at center of fraud claims he's 'not running' right now. Ditched the Fitbit, have you?
Personal Tech26 Sep 2022 | 4