Christopher Nolan ramps the epic factor up to self-consciously irritating

Despite how tired that sort of plotting is, it’s only mildly aggravating. McConaughey does the dreaming, slightly rubbish father role well and the young actors playing Murph and her brother Tom (Timothée Chalamet) are terrific, while John Lithgow is his dependably brilliant self as the kids’ maternal grandfather Donald. There are a few overwrought conversations on Earth, but they’re nothing compared to the hand-wringing over-egging the pudding that’s going to happen.

As soon as they hit the stratosphere and Caine’s voice starts intoning Dylan Thomas’ “Do not go gentle into that good night”, you know that the epic majesty and bleak desperation of the journey will not be allowed to speak for themselves – they’re going to be shouted from the rooftops after being telegraphed to the audience. 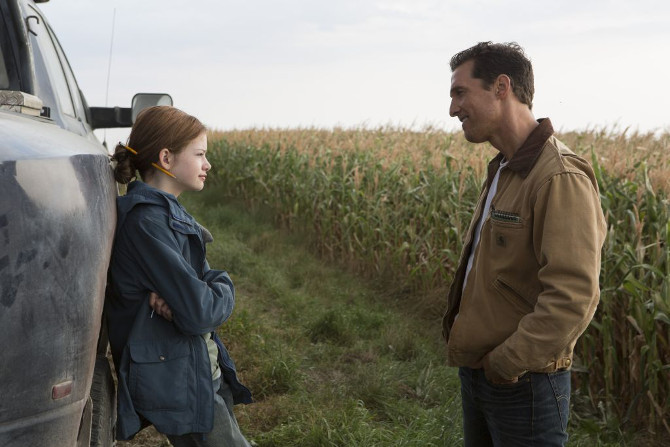 It’s not just that every moment has to be filled with meaning, there’s also a healthy dollop of over-sentimentality. Why does humanity deserve to survive? I’ll give you one guess. (It starts with L, in case you need the hint).

But even though Interstellar does everything it can to be overbearing, it still almost gets away with it, because it’s so breath-taking and so very, very cool. Like Alfonso Cuarón did with Gravity, Nolan puts in a huge effort to depict space as accurately as the plot and limitations of special effects allow and the result is truly amazing. Although there are a few hang-on-a-minute moments with the science as well, the whole point of the movie is that they’re supposed to be pushing the very boundaries of what we know, so it’s easy to get swept up along with them.

This movie is naturally an epic, because every scene is beautifully shot, from flowing fields of corn to alien vistas, so it’s a shame that Nolan felt the need to ham it up so much. He should have left more room for moments like the one where McConaughey tells robot AI T.A.R.S. to turn his humour setting down a few notches (all the best lines are from or about T.A.R.S.) and let the scenes speak for themselves.

But then, the dialogue is only so disappointing because the spectacle is so fantastic. This could have been an epically good movie instead of a good epic, but it’s still worth the price of the cinema ticket for those views. ®