Life On The Edge: The Coming Age Of Quantum Biology

Jim Al-Khalili is a theoretical physicist and BBC science presenter. Johnjoe McFadden is a Professor of Molecular Genetics. Life On The Edge is the first book about the subject of Quantum Biology that has been written for the layperson.

The book opens with the mystery of bird migration. Studies had indicated that European robins appeared to follow the Earth’s magnetic fields. The authors point out that this is a very weak force, equivalent to a hundredth of the force of a typical fridge magnet. Bird migration was the first phenomenon to be linked to a quantum level, mainly by studies carried out by German universities.

Life On The Edge goes on to relate the ubiquitous nature of quantum mechanics in modern technology from semiconductors, lasers and smartphones to satellite navigation and MRI scanners – estimating that a third of the GDP of the developed world is made from quantum technology.

It is stated that quantum phenomena had only been observed in temperatures close to absolute zero on a very small scale. Scientists were very dubious as to whether these phenomena were active in the “warm and wet” conditions of living cells, but it turns out that on a minute scale, particles within living cells obey the same principals as those in non-living molecules.

Al-Khalili and McFadden relate the history of quantum phenomena and its links to biology by the work of two very different individuals in the 1930s and 1940s. Pascual Jordan was a German scientist who first made the connection, but rather blackened his name by supporting the Nazis and trying to include Adolf Hitler in his theories. 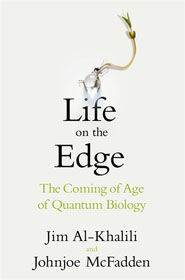 Erwin Schrödinger, the most famous cat owner in physics, fled the Hitler regime to Ireland where he wrote What is Life? [PDF], which purported to show a quantum solution to the mysteries of creation.

The book goes on to ask whether there is a quantum level in the actions of enzymes such as collagenase and recounts investigations into how this is likely to affect such metamorphoses as tadpoles absorbing their tails.

Isaac Newton is berated for asking the wrong question: Not how the apple fell to earth, but how the apple got on the tree in the first place. Eventually we return to the subject of migrating birds and butterflies.

Life on the Edge describes how a series of observations at the end of the twentieth century established Quantum Biology as a viable subject. A chemical called cryptochrome that operates at a quantum level was found in the eyes of birds which enables them to “see” magnetic fields. A similar sensory receptor has been discovered in the olfactory senses of migratory salmon.

The story moves on to genetics, where one Per-Olov Lowdin is quoted as saying: “The genetic code that makes life possible is inevitably a quantum code.”

It is suggested a tad unscientifically that: “Quantum weirdness could be playing a role in the mutations that drive evolution.”

The book goes on to describe the work of Roger Penrose, who theorised that the human mind is a quantum computer. The authors don’t dodge the big questions, one of the most fascinating lines in this book is: “Perhaps death represents the severing of the living organism’s connection with the orderly quantum realm, leaving it powerless to resist the randomising forces of thermodynamics.”

Life On The Edge is a fascinating read, Al-Khalili and McFadden admit that this is a very new field of research and that many of the ideas propounded are theoretical and speculative. However, it is a great introduction to a subject that we are sure to hear a lot more about in the near future. ®