Is that an Internet of Things in your pocket, or are you just glad to see me?

What if, instead of trying to control the sale of guns – a political impossibility in America – weapon use were enforced by a complex combination of electronics, WiFi communications and policy enforcement?

That's what researchers from the University of Delaware are proposing, asking in essence whether technology offers a way to hack around the Second Amendment. In this paper at Arxiv, Marcos Portnoi and Chien-Chung Shen of the university's Department of Computer and Information Science propose a combination of wireless security and encrypted broadcast to enforce gun safety.

Wireless-Delimited Secure Zones with Encrypted Attribute-Based Broadcast for Safe Firearms draws on the idea that if computers are now reliable enough for cars, medicine and fly-by-wire aircraft, they are probably reliable enough to provide a framework to cut down mass shootings.

The idea isn't brand-new, as the authors note. Their addition to the research is to propose what they call a “context-aware system in the firearm” that can draw on information from sensors in the environment to make safety decisions.

In other words, instead of enforcing “safe environment” rules by way of checkpoints where guns are not permitted (on airplanes, in consulates and embassies and so on), “we propose to address these safety areas within the firearm itself”. The gun would negotiate its operations by communicating with the safety area transmitter. 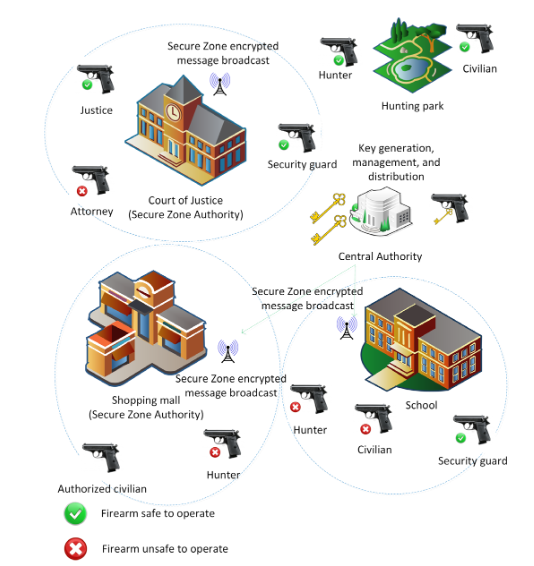 An Internet of Things approach to gun control. Source: Arxiv

In the weapon, the scheme proposes a private key encoding what the gun and its user are allowed to do – so, for example, a gun might be authorised for hunting and shooting range use, or one in the hands of a security guard might be tied to the location he or she is guarding.

Such systems need to be protected against malicious attack, so the paper proposes adopting a ten-year-old concept called “attribute-based encryption”. That way, “only firearms possessing the necessary attributes” can decrypt messages. In other words, only if the gun has a secret key that matches the attributes of the transmitter would it become active.

Vulture South imagines commenters will have a field day picking this one apart... ®