The condition of the rail surface is crucial in preventing cyclic top. This is where a dip in the rail causes a wheel to bounce. The bounce can damage a subsequent part of the track which then causes another bouncing point to form. Ultimately this can lead to a sequence of dips forming in a positive feedback loop – which, at its worst, could lead to a derailment. 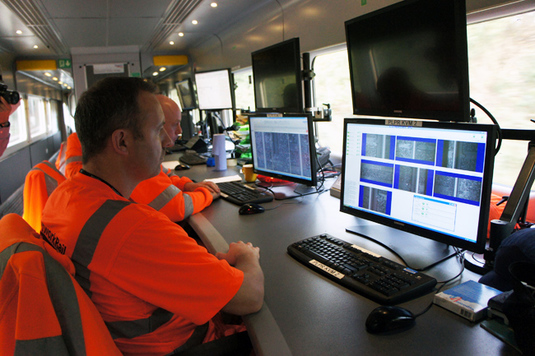 The Plain Line Pattern Recognition system compares what it sees with a "perfect" image and throws out candidates for manual inspection.

The Plain Line Pattern Recognition system (PLPR) looks at the condition of the track. An algorithm compares what the camera sees with a “perfect” image and flags up candidates for further inspection.

The image recorded by PLPR comes from seven cameras looking at the track from different angles and is recorded as one long file. This is 2048 pixels wide and 30 miles long, capturing as little as 0.8mm of movement. The operators say it’s more than capable of reading a crisp packet at 125mph.

British weather accounts for lots of the problems flagged through PLPR and its operators think that those networks which are primarily in tunnels – such as Crossrail and the Channel Tunnel – have an easier time of it. In September 2014 the PLPR identified over 33,000 faults. Some of these were already known about but there is no way this amount of work could be done in such a short time without the high level of automation the NMT provides.

Next page: Walking the lines, with tech
Page: