FCC to Obama on net neutrality: We work for CONGRESS, SIR, not YOU

Lobs his submission in with 'Lord of the Rings' oddness

US watchdog the FCC has politely told President Obama to get stuffed, gently pointing out that the agency reports to Congress – not the White House.

President Obama excited his supporters yesterday, following a drubbing in the mid-term elections, by going nuclear on internet regulation.

The White House said it backed the strongest immediate regulatory option available: to put internet provision under rules devised in the 1930s to deal with the Bell telephony monopoly. This is called the "Title II re-classification" of the market as circuit-switched network.

The US Congress decided against regulating packet networks as a circuit-switched utility in the 1990s to encourage investment, and the consensus has held since then. Even Google and Facebook don't back Title II reclassification - or at least, not publicly.

In response to the White House, FCC chairman Tom Wheeler writes: "As an independent regulatory agency we will incorporate the President's submission into the record of the Open Internet proceeding."

That means it goes alongside the other 1.1 million submissions made, including many from the lunatic fringes of the internet – such as this gentleman, who informed the agency:

The apocalypse is knocking at the door. The devil has found his steed. Lucifer has named his nightmare and he hath dubbed it the FCC.

(One person simply posted the entire script of Lord of The Rings. A fine selection of the nuttiest can be found here. )

How long will it take?

Wheeler adds that any change proposed by the FCC would need to be legally watertight, and explains that this is why the FCC is taking its time. Since the FCC's 2010 net neutrality rules have already been found to be unconstitutional (they were struck down for overreach of authority, and this is not a trivial point, Verizon successfully sued the FCC arguing that in creating the 2010 rules, "the FCC [had] acted without statutory authority to insert itself into this crucial segment of the American economy, while failing to show any factual need to do so.")

A Title II reclassification would represent a far greater extension of authority, since Congress specifically sought to regulate a new packet networking market differently from a national, circuit switched monopoly. 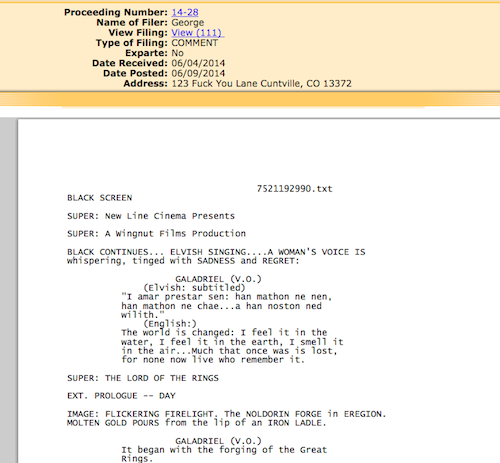 For example, the Brand X Internet Services decision established that reclassification under the 1930s rules would place all kinds of services under Class II "common carriage" requirements, and not just last mile telcos, simply because they include a transmission element. (The Brand X case which affirmed that cable internet services are not subject to Class II rules and established that “the relevant definitions do not distinguish facilities-based and non-facilities-based carriers").

Google built the world's largest private network to carry YouTube traffic – would it be happy with everyone using these facilities? Or would Amazon be obliged to offer free access to its cloud? Google has already said it doesn't offer voice with its fibre because of common carrier regulations, even though the cost of the voice part would be "almost nothing" to Google.

Pro-cable analysts add that another consequence of redefining internet services as telephone services might be to hand control of the internet to China and Russia.

Given the precarious position of the FCC, it's likely that only Congress has the authority to devise telco regulation that might withstand a legal assault.

All of which means that President Obama's support for Title II is as sincere as Prime Minster Cameron threatening a Brexit. Obama can't deliver, because he doesn't have the votes in Congress. And the FCC doesn't have the authority to do it itself. ®