“Although it may not seem like it, Agilkia presented the least hazardous terrain"

“Although it may not seem like it, Agilkia presented the least hazardous terrain of all the landing sites considered during the selection process,” the agency said. 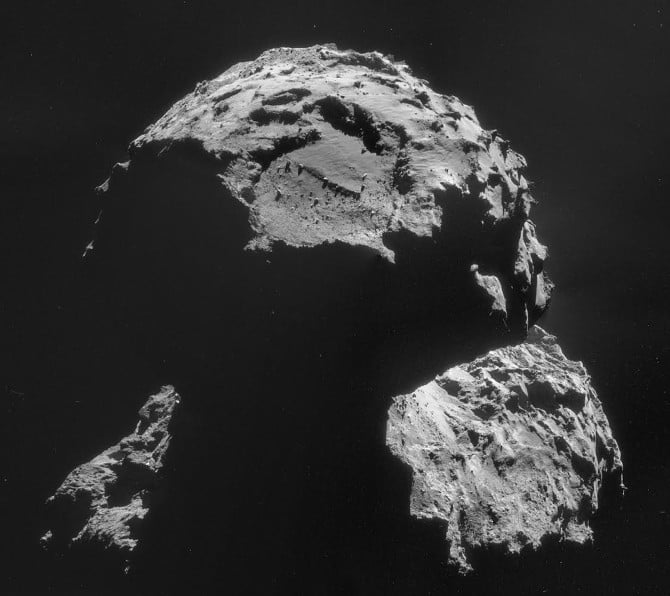 Once it gets close to the landing zone, Philae will harpoon the surface to anchor itself, while a small thruster on top of the craft compensates for the harpooning impulse. As soon as its three feet hit the ground, they start drilling in with ice screws to further stabilise the craft.

So there’s only a whole heap of things that could possibly go wrong – and that’s just the landing.

If it pulls that off, Philae still has to run as many experiments and tests as it can in a 64-hour period, which is about how long the agency expects its batteries to last. The lander does come equipped with solar panels to extend its life, but these will only work if they don’t become clogged up with dust on the surface.

The little box lab contains 10 scientific instruments, including a drill to bring up samples from as much as 23cm deep and sonar to give a view of the internal structure of the comet, as well as chemical analysis and mass spectrometer tools.

Even if the lander’s solar cells keep giving it power, it doesn’t have long to live. By August next year, the comet will make its closest approach to the Sun, likely baking the lander if it hasn’t already succumbed to the heat on approach.

But if all does go well, Philae could help answer one of science's most fundamental questions - did life on Earth begin with seeding from comets?

Comets contain complex organic molecules, rich in carbon, hydrogen, oxygen and nitrogen, which are the elements that make up nucleic acids and amino acids – the building blocks of life. Finding evidence of the left-handed amino acids that make up all life on our world could prove that comet-seeding, where space rocks crashed into early Earth, helped start life on the planet. ®