A circulator is a special application of a waveguide (using a magnetic material) that allows an RF signal to pass from one port to the next. They're common in applications like radar, where they're used as duplexers: they route a signal from the transmitter to the antenna, and from the antenna to the receiver, but don't let signals pass directly from the transmitter to the receiver.

The university explains that circulators work by breaking the symmetry in a wave transmission between two points.

However, passive circulators are constrained by physics, with their size influenced by the frequencies they handle – and unfortunately, at cellular frequencies, the circulator is too large to be practical in a telephone.

Which is why the University of Texas boffins are pleased with themselves: they've created an active circulator that's both small enough and efficient enough (important in terms of battery life) to be used in cell phones.

This would, the researchers say, allow full-duplex operation of a phone on a single frequency. 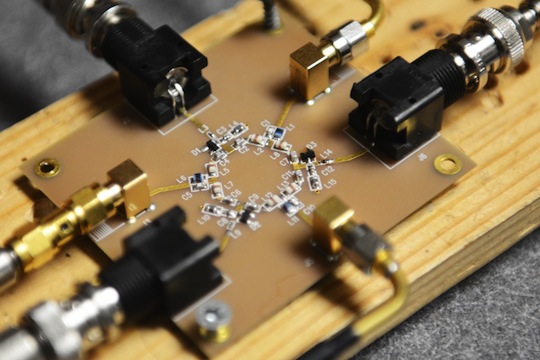 The radio wave circulator developed at the University of Texas

“Freed from a reliance on magnetic effects, the new circulator has a much smaller footprint while also using less expensive and more common materials,” the university's announcement states.

“These cost and size efficiencies could lead to the integration of circulators within cellphones and other microelectronic systems, resulting in substantially faster downloads, fewer dropped calls and significantly clearer communications.”

The electronic circulator mimics the magnetic effect, the researchers say, by replacing the magnetic bias “with a travelling wave spinning around the device”.

Their prototype is 2 cm in size, but the researchers say that replacing discrete components with integrated manufacture, it could be shrunk down to micron sizes.

Other applications the University envisages for the device include radars and photonics. ®