As a handset the Nexus 6 is big and curvy, with the device measuring 159.3mm (6.27 inches) tall and 83.0mm (3.15 inches) wide, with a back that bulges 10.1mm (0.39 inches) at its thickest point but only 3.8mm (0.14 inches) at the tips of the device. Motorola has done very well in squeezing thin bezels on the handset, particularly laterally, but it's still a big phone in comparison with the competition, albeit with a massive screen area.

At 184 grams (6.49 ounces) the handset is heavier than the Samsung Note 4 and the iPhone 6 Plus but the slim edges make it feel lighter than it is. However, the aluminum frame and plastic body shell feels quite slippery in the hand and with something this heavy a grippier feel would have been reassuring.

Rather oddly the volume rocker is in the middle of the handset on the right hand side, with the power button only slightly above it – much further down than with the Moto X. The new design takes a bit of getting used to and the button positioning makes the Nexus 6 harder to use one-handed, since you can only hold one half the phone to adjust them.

If you're going to spend $649 for the 32GB unlocked version, or $699 for the 64GB version, then a few extra bucks on a shock-resistant case might be worth it to protect the Corning Gorilla Glass 3 screen from damage. A test from three feet onto carpet left the phone unscathed, but trying that over a hard surface could be very damaging and, if the Nexus 5 is anything to go by, the screen will be difficult to replace.

That 5.96-inch AMOLED screen is, however, excellent if unscathed. At 1440 x 2560 this is a proper viewing platform and with 493 ppi the resolution is hard to beat. Colors are bright and clear, and the 32-bit ARM-compatible quad-core 2.7GHz Qualcomm Snapdragon 805 processor, the Adreno 420 GPU, and 3GB of RAM make this phone more than proficient at handling almost all kinds of use.

Using the AnTuTu benchmark the Nexus 6 scored a very impressive 49,382, and that's without memory optimization. The Qualcomm processor did run a little warm after a series of tests, but not uncomfortably so. 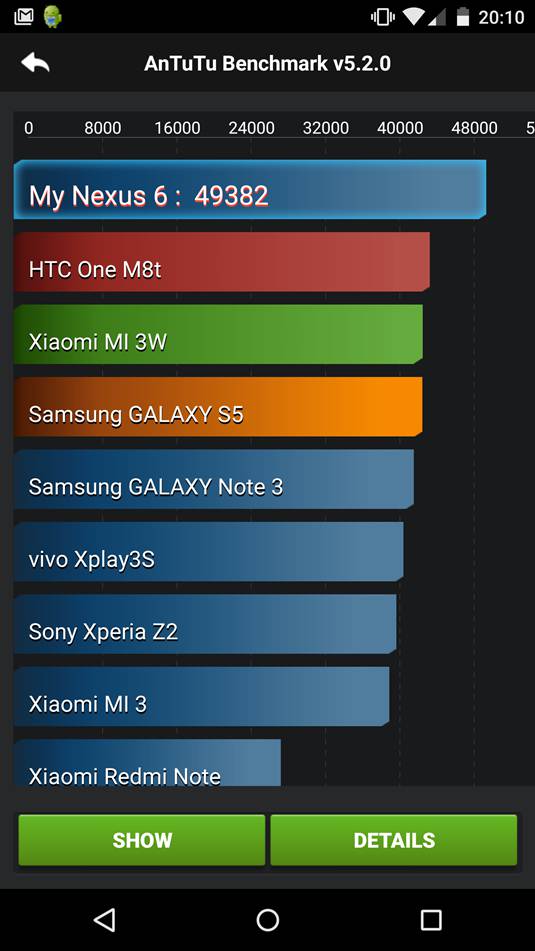