'Scope boffins get INSIDE URANUS after snapping mystery spots

In space, no one can hear you squeak

Pics Uranus is one of the darkest places in our Solar System, so it's hard to spot from Earth. However, astronomers have caught the gas giant lighting up as unexplained storms ripped away its atmospheric cover. 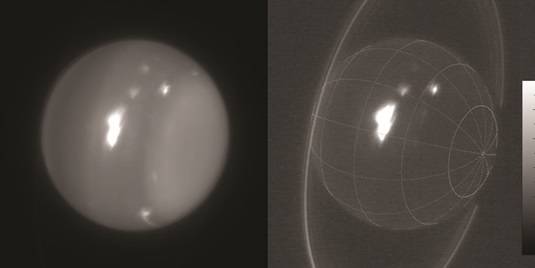 Something is rumbling deep within Uranus

Using the W. M. Keck II Telescope on Hawaii, astronomers first noted the planet's unusual appearance on August 5 and 6: a bright spot appeared that accounted for 30 per cent of the light usually reflected by the gas giant. They estimated that the images showed a massive storm disrupting the upper atmosphere of the planet.

"This type of activity would have been expected in 2007, when Uranus's once every 42-year equinox occurred and the Sun shined directly on the equator," noted co-investigator Heidi Hammel of the Association of Universities for Research in Astronomy.

"But we predicted that such activity would have died down by now. Why we see these incredible storms now is beyond anybody's guess."

Professional astronomers weren't the only ones gazing into Uranus: hobbyists were able to spot new details that were missed by Keck's imagers. In September French amateur astronomer Régis De-Bénedictis photographed the storms and these were backed up by images from his compatriot Marc Delcroix.

Delcroix, who works for an auto parts supplier in Toulouse by day, has been looking skywards for the last eight years, and on a visit to the nearby Pic du Midi telescope, he managed to get photos of Uranus.

"I caught the feature when it was transiting, and I thought, 'Yes, I got it!'" he said. "I was thrilled to see such activity on Uranus. Getting details on Mars, Jupiter or Saturn is now routine, but seeing details on Uranus and Neptune are the new frontiers for us amateurs and I did not want to miss that."

"I was so happy to confirm myself these first amateur images on this bright storm on Uranus, feeling I was living a very special moment for planetary amateur astronomy."

A second set of images reveal the depths of the planet's atmosphere. The results showed the storms must be forming in the uppermost cloud layer of methane-ice in Uranus's atmosphere, and helped convince the operators of the Hubble Space Telescope to take a peek too.

The Hubble snaps were remarkable, we're told, and will overturn many of the existing assumptions about what goes on inside Uranus. The telescope showed the brightness was caused by multiple storm fronts spread over more than 9,000 kilometers (5,760 miles) and at a variety of altitudes.

"The colors and morphology of this cloud complex suggests that the storm may be tied to a vortex in the deeper atmosphere similar to two large cloud complexes seen during the equinox," said Larry Sromovsky, a planetary scientist at the University of Wisconsin.

"If indeed these features are high-altitude clouds generated by flow perturbations associated with a deeper vortex system, such drastic fluctuations in intensity would indeed be possible. These unexpected observations remind us keenly of how little we understand about atmospheric dynamics in outer planet atmospheres."

A paper on the full findings of the Uranus probing is being presented at a meeting of the American Astronomical Society's Division for Planetary Sciences in Tucson, Arizona, on Wednesday. ®