Rosetta probot drilling denied: Philae has its 'leg in the air'

Not best position for scientific fulfillment

Tough choices lie ahead for Rosetta's Philae scientists after they discovered that the lander’s bouncing touchdown has pushed it into the shadow of a cliff, making it unlikely that its batteries can recharge. 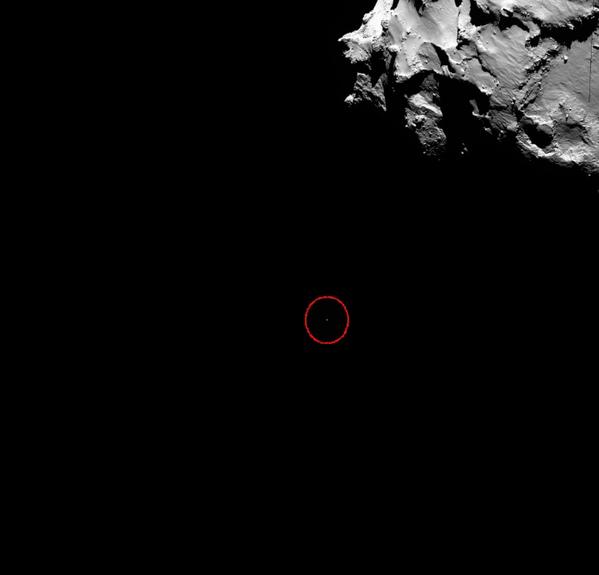 Philae on its way to Comet 67P. Credit: ESA/Rosetta/MPS for OSIRIS Team MPS/UPD/LAM/IAA/SSO/INTA/UPM/DASP/IDA

The plucky probot had an incredibly lucky landing yesterday when it managed to end up sitting relatively upright on the comet surface, despite its harpoons failing to fire. Data from the craft indicates that it bounced twice in Comet 67P’s low gravity, taking two hours to complete the first bounce.

“We have a better understanding now about how we got there but we still don’t really know where,” said project manager Stephan Ulemac told The Register.

“The first rebound, we’ve analysed in more detail in data from [magnetic instrument] ROMAP as well as from the data from the landing gear itself. Now we know the first jump was about two hours, we assume that we came in at 1m/s and then rebounded at 38cm/s… [so the] two hours jump was probably 1km in distance. Then we had a small jump for seven minutes.

“We did a lengthy process to choose the landing site between H or I or J, but maybe we landed on all of them!” he joked.

The rebounds suggest that Philae didn’t land in the soft sandbox that boffins from the European Space Agency and German space agency DLR were expecting, but hit something a little harder instead.

“That explains why we bounced so much, it’s like a trampoline,” Ulemac said.

Images and data from both Philae and Rosetta, the craft’s orbiting mother-satellite, have given the scientists a pretty good idea of where the lander first touched down, but figuring out where it ended up is proving a bit more difficult.

What they do know is that Philae is largely in the shadow of a nearby rock formation, which isn’t good news for extending its mission beyond the initial planned 64 hours.

“We see that we’re getting less sunlight than we planned for at the landing site, we’re getting around 1.5 hours of Sun instead of the six or seven that we were aiming for. We are calculating now what this means for the near future. Unfortunately, this was not the situation we were hoping for,” said Koen Guerts from the Lander Control Centre at DLR in Cologne.

The possibility that Philae’s batteries would not be able to charge was always one that the scientists planned for, which is why the initial scientific mission was planned to complete in the 64 hours that the primary battery is expected to last.

However, Philae’s unorthodox landing has further complicated one element of the comet exploration many were hoping for, the drilling of a sample of the space-rock for chemical analysis. This is the experiment that could answer questions about whether comets seeded life on Earth by providing the planet with left-handed amino acids – the building blocks of our living world.

Next page: Drilling is a risky business
Page: