Rosetta probot drilling denied: Philae has its 'leg in the air'

Not best position for scientific fulfillment

Drilling is a risky business

But because the lander is not anchored to the surface by its harpoons and it’s unclear how secure it is, deploying the drill is a big risk.

“We’re almost vertical, one foot is probably in open space, two feet still on the surface, but you can imagine the sort of gentle manoeuvring we will have to do,” Jean Pierre Bibring, Philae lead scientist and principal investigator for the CIVA camera, pointed out. 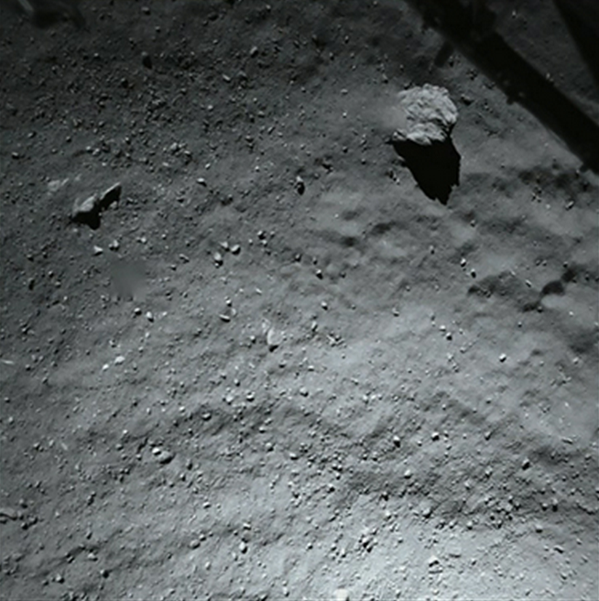 Any mechanical operations done by Philae risk dislodging it from the surface of the comet, depending on how it’s situated, which the team still needs more time to fully determine. Drilling in particular would be a dangerous proposition, potentially giving the lander enough momentum to push it off the rock and into space, or even just toppling it over.

Attempting again to fire the harpoons carries the same risks, although it may be worth the chance later in the lander’s life.

There are a number of options for the team, but they plan to proceed logically – taking care of all the least risky experiments first before determining if chances are worth taking on Saturday, when the battery life starts winding down.

Despite the tough choices ahead, the mood at ESOC today is euphoric.

“Please don’t focus on the negative!” Bibring said, pointing out that the fact humanity has reached a comet at all is a miracle and landing on one probably represents the technical limit of what we can currently achieve.

Certainly, the team at today’s briefing were jubilant, emotional and very, very tired! Most of the ESA team made sure to mention the ESOC Flight Dynamics boffins, whose precise mathematics allowed Rosetta and Philae to perform an almost perfect separation and descent, even if the landing didn’t go quite according to plan.

They were also thrilled that the comms link with Rosetta and Philae was working so well, pushing scientific data back to Earth at around 26Kbps.

Regardless of how long Philae lasts or whether it has the chance to drill into Comet 67P, the Rosetta satellite is still expected to be operating long into next year, transmitting data back as the comet gets closer and closer to the Sun.

Philae manager Ulemac even suggested that it might be possible to move the lander, or failing that, the rather unlikely but not impossible chance to make contact with the craft again in months’ time as the comet rotates towards the Sun.

“By extending the landing gear again, we could in principle hop, like we did before unintentionally,” he said. “But with the position we’re in now, with one leg in the air, unsure of our orientation, we wouldn’t dare try this now. So I’m not sure if we have enough time to do a jump out of the hole we might be in or away from this wall.”

“Philae will go into hibernation mode [after the battery runs out] and it’s programmed in a way that whenever it gets Sun, the solar cells would warm the batteries and then start charging. So in months, we could theoretically wake up.

“But yesterday, we were very, very lucky, and the idea of waking up in months… I would not like to say!” he said. ®