Punched into Hell through a grave by an epileptic

Ubisoft's share price has dropped since the game's release on Tuesday, dropping by more than 13 per cent before rallying.

Ubisoft is now frantically working on a fix for the problems, which have prompted claims that the game shipped when it wasn't properly finished. 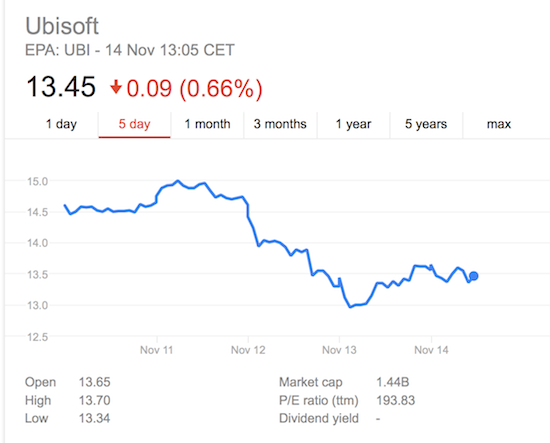 "We are currently working on our next update that will help address some of the specific issues some players are having including: Arno [the main character] falling through the ground. Game crashing when joining a co-op session. Arno getting caught inside of hay carts. Delay in reaching the main menu screen at game start," it said.

Set in the French Revolution, the new game simulates the streets of Paris in unprecedented detail. However, the setting is more like Paris during the sexual revolution of the 1960s when its residents were all off their heads on LSD.

We flicked through YouTube to find footage of the glitches. The end of the following video shows the main character suddenly transported into a smoke-filled void, through which he appeared to fall without actually moving.

After a few moments, the assassin suddenly teleports to a perilous position perched on the edge of a roof, physically shaking. Which is probably how most of us would react.

Here's another look at the scary cloud world, where our hero falls through the ground to spend the rest of eternity uselessly flailing in mid-air.

Nasty alternative realities feature in many glitches, including this terrifying image of a world where bramble bushes have overrun the whole of the universe and where an irate Frenchman pushes our hero through the grounds into what looks alarmingly like the bleak depths of Hell. Again, having seen this netherworld, the eponymous Assassin has something of a nervous breakdown and can only respond by balancing on one foot atop a chimney stack. Flick to 38 seconds to see it - and don't say we didn't warn you.

This last video shows Arno swimming in a sub-Paris sea, which is actually a pretty cool effect. Eventually he swims too far and drops into the lethal cloud-filled void that lurks underneath Paris' subterranean sea.

As per description above

Have you seen any of the terrifying netherworlds of Assassin Creed: Unity? Are you scarred for life by the experience? Get below and let us know. ®