London's Natural History Museum will be displaying the world's most complete Stegosaurus skeleton from early next month.

The 300 Jurassic bones making up the plant-eating dino were dug up 11 years ago in Wyoming, US. When fully assembled, it measures 560 centimetres long and 290 centimetres tall. The animal is understood to have weighed as much as a 4x4 vehicle.

Dino fans will no doubt be thrilled to hear there are 19 back plates and four tall spikes among the bone collection. The Natural History Museum said that the skeleton was only missing the left arm and base of the tail.

It's unclear if this specimen is male or female. Bone boffins say its fiendishly difficult to determine the sex of dinosaurs.

However, they do know that this particular skeleton belonged to a young adult, as Stegs could reach up to nine metres in length. Which, fact fans, is longer than one of London's double decker buses. 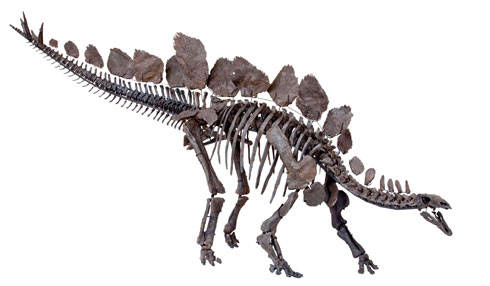 It remains a mystery how this creature, which lived around 150 million years ago, carked it. Experts have been unable to detect any marks or breaks in the skeleton that could help indicate a violent death, for example.

"It inspires genuine wonder when you see it, but unlike our much-loved Diplodocus cast, this is the real thing. We hope that this amazing specimen will inspire a new generation of young visitors to learn more about the natural world and our place within it," said Natural History Museum director Sir Michael Dixon. ®

Look, we wrote it! You're all wrong!

Linus Torvalds outs himself as US citizen

Stranger in a strange land

The DIY spy-in-the-sky: From kites to octocopters

A beginner's guide to aerial surveillance