Page File El Reg bookworms Lucy Orr and Mark Diston look at publishing's finest in scary and science fiction along with scientific uncertainties. Back on form are Stephen King with his latest spine tingler and William Gibson with a brain-teasing tale. Meanwhile physicists Robert P Crease and Alfred Scharff Goldhaber set about proving that you can explain mindbending quantum theories without equations and keep your readers with you.

I find Stephen King's novels range from the prophetic to the personal. As one of his “number one fans” (just call me Annie) watching coverage of the current Ebola outbreak I just can’t help but think of The Stand.

King has had a prodigious output in recent years but I almost wish he hadn’t bothered as I have wound up feeling cheated by plodding clunkers such as Doctor Sleep and Mr Mercedes.

Revival is something of a return to form - short and unsettling enough to remind me of the night I stayed up wide-eyed with terror after reading the topiary scene in The Shining. His ability to make me consistently empathise with his characters gives his work a unique realism even when broaching the extremes of horror. This time round it seems the King’s editor has finally been allowed free rein as Revival is a nifty 370 pages and every page matters to the story, keeping the pace of the action moving.

Reminiscent of It, Revival spans several decades, starting in a small New England village in the 1960s. I am drawn into the life events of two families but specifically a man, the Reverend Charles Jacobs (with a passion for all things electric) and a boy, Jamie Morton. 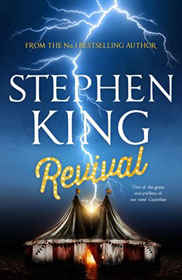 “A shadow fell over the battlefield. I looked up and saw a guy standing there. He was blocking the afternoon sun, a silhouette surrounded by golden light — a human eclipse.”

When a tragic automotive event strikes the Jacobs family, Reverend Charles abandons his faith and treats his flock to a final “Terrible Sermon” before being asked to relinquish his post. The next few chapters detail Jamie finding a passion for music and embracing heroin to suppress his inner demons.

Reaching the depths of his dependence Jamie stumbles upon Jacobs as the star of the seedy sideshow “Portraits in Lightning”, dazzling rubes with his “special electricity”. Jacob’s unconventional cure for Jamie's addiction shows empathy but there’s something askew about this mad professor and it is in the sinister side-effects of this treatment where Revival finally starts to get scary.

Jamie soon finds out that he isn’t the only one of Jacobs’ patients to suffer disturbing side effects and they quickly part company. But Jacobs is not finished with his otherworldly experiments and Jamie is once again drawn to him like a bug to an electric zapper.

There’s a lot of King in Jamie, the author makes no secret of his love of playing in a rock and roll band even now - and admits to a narcotic induced blackout or two. At the core of this book is King’s infatuation with the ageing process and the details of ordinary life lull the reader making the reveal of the final Faustian pact so gripping.

Mary Shelley's Frankenstein gets more than a nod as the slow burning, nail-biting plot builds and builds to hold the tension. Though not as page-by-page terrifying as Pet Sematary Cemetery the unsettling Lovecraftian conclusion kept me on the edge of my seat.

My father belonged to the team that discovered the Higgs Boson, pushing the boundaries of scientific curiosity, and for me it’s interesting to read a novel that uses horror to address questions about the nature of matter. This could be Stephen King’s own version of The Standard Model but with added Cthulhu. Revival is a must for any Stephen King fan that, of late, has been missing the author's own special electricity - it positively gave me a buzz. LO