Boffins get a handle on pre-digital computer, restore it to working order

Video A group of American engineers have rescued and returned to operation a Fourier-Transform-calculating machine designed in the 19th century.

The machinery is an impressive reminder not only of what could be achieved in the pre-digital era, but also of the genius of its designer Albert Michelson, a name less-known to the general public than contemporaries like Albert Einstein.

Michelson's best-remembered achievements are contributions to setting a value to the velocity of light, and in collaboration with Edward Morley, constructing the famous Michaelson-Morley experiment which both disproved the theory of the aether and helped lay down the basis of interferometry.

Interferometry depends on the ability to identify the individual frequency-domain components of a complex light signal, using the Fourier Transform – and this is painfully laborious to do by hand. 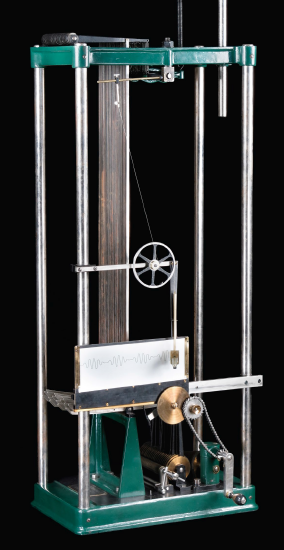 As noted in the ebook accompanying the videos notes, Michelson wrote, anyone constructing a large number of sine waves by hand “has felt the need of some simple and fairly accurate machine” as a time-saver.

Hence the Harmonic Analyser: a piece of machinery that combines springs, cone gears, cylinder gears, rocker bars, a hand crank and a pen to both combine sine waves into complex functions, and in the other direction, perform a Fourier analysis to work out the frequencies that make up a waveform.

As “Engineer guy” Bill Hammack explains in the video below (third in his series), the machine operation is surprisingly simple: the user sets the wave they want analysed in the rocker bars of the machine and turns the crank. The pen outputs the coefficients - in other words, the sine waves (fundamental and harmonic) that make up the input function, and their relative amplitude.

The machine Hammack and his collaborators demonstrate in their video series and e-book is a 20-spring unit.

That limits it to analysing a waveform with 20 samples. However, as they note in the book, Michelson also constructed an 80-sample machine.

The machine they used is held by the University of Illinois' Department of Mathematics, and was built by William Gaertner & Company. While the authors can't be certain of the age of the machine, they believe it was manufactured between 1901 and 1909. ®